The first attempt to sell the original Jackie Robinson professional baseball contracts with the Brooklyn Dodgers and the Montreal Royals at auction was unsuccessful, as the reserve price established by the owner of the historic Civil Rights documents was not met. Goldin Auctions will continue to handle the sale of the documents until they are sold, and whether they are sold at auction or privately, 10% of the purchase price will be donated to the Jackie Robinson Foundation.

“Our initial outreach to collectors, philanthropists, corporations and others over the past few months was extremely positive with many expressing interest in taking stewardship of these historic Civil Rights documents,” said Ken Goldin, Founder of Goldin Auctions. “It’s not unusual for an item like this to be brought to auction more than once or sold privately after the initial offering. We’ll continue to look for an owner who will share these historic documents with the world between now and the next scheduled auction in the late Spring.”

Additionally, if the new owner chooses, the contracts will always have a home at the site of the future Jackie Robinson Museum both live in New York City and online. Collectors interested in purchasing the historic documents should contact Goldin Auctions at info@goldinauctions.com or calling 856-767-8550 between 9 am -5 pm ET.

The two contracts, which will be sold together as a single lot, were signed by Robinson on October 23, 1945 with the Montreal Royals and on April 11, 1947 with the Brooklyn Dodgers. The contracts have been authenticated by PSA/DNA, James Spence Authentication (JSA), Beckett Authentication Services and John Reznikoff of University Archives. They were appraised for $36 million by rare document expert Seth Kaller who has appraised many comparable historical items, including Abraham Lincoln signed copies of the Emancipation Proclamation and Benjamin Franklin signed copies of the U.S. Constitution. The documents are currently insured by Chubb for $36 million.

During the past two years, the contracts have been on public display at several museums and major league stadiums including the National Constitution Center in Philadelphia, City Hall in Montreal, Times Square in New York City, Busch Stadium, Wrigley Field, and others, by the current owners, Collector’s Café. 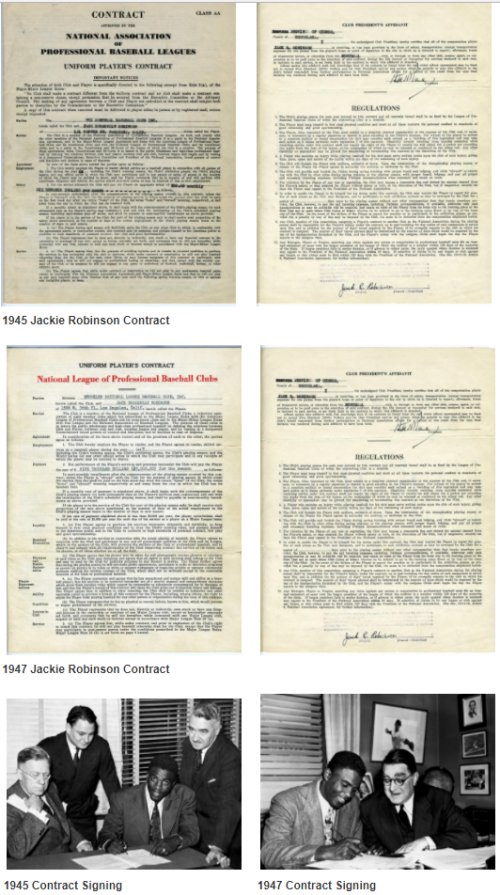