This is your chance to buy Autographs, Manuscripts, Books & Relics. Join University Archives on June 20, 2018 at 10:30am EST. The auction is now available for viewing and leaving bids on Invaluable, eBay & AuctionZip.  The current auction offers a great selection of Autographs, Manuscripts, Books & Relics. Bid, register and view items from the auction here .

With politics so much in the news, it’s fitting that University Archives’ online auction slated for Wednesday, June 20th, is packed with presidential memorabilia – items from all the past U.S. Presidents, in fact. The auction features 266 lots of rare, highly collectible autographed documents, photos, manuscripts, books and relics, beginning at 10:30 am Eastern.

“It’s rare to find all of our past presidents represented in one single event, as is the case with this auction,” said John Reznikoff, the owner of Westport-based University Archives. “The examples are mostly high-quality and many have superior content. Most have been off the market for at least half a century.” The expected top earners are items from Washington, Lincoln, Jefferson, JFK and Reagan. Jackie Kennedy is represented as well.

Mr. Reznikoff added, “The auction is particularly strong in Revolutionary War period items, highlighted by items from the Charles I. Forbes collection, which haven’t seen the light of day in more than fifty years. Included in the group are more than a few items relating to George Washington, with a rare and superb letter from Nathaniel Greene to General Washington.”

The letter signed by Greene to Washington, dated June 24, 1780, informs Washington of his victory in New Jersey while serving as a major general in the Continental Army, one of the finest Greene letters known. Also sold will be a commission letter signed by Washington, dated Sept. 30, 1789, in which the president appoints William Lewis, a Quaker, as attorney for the District of Pennsylvania (Washington’s home seat). Both of the letters carry estimates of $10,000-$12,000.

An archive of three documents relating to the dismissal of Mary Katherine Goddard as Baltimore Postmaster (and printer of the Declaration of Independence) in 1789 by Postmaster Gen. Samuel Osgood, who said the position required “more traveling than a woman could undertake,” should realize $5,000-$6,000. Goddard pled her case to President Washington, who refused to consider it. It could be said that this was one of the very first women’s rights causes in the United States. 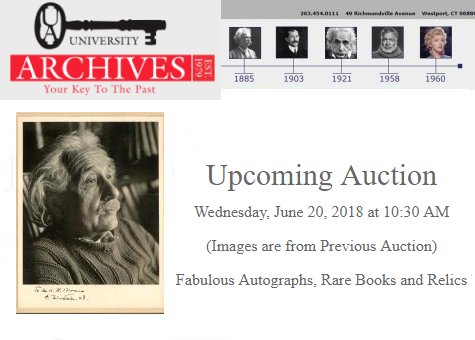 A lengthy letter written around the 1850s by Johannes Brahms to his good friend and “concert master” Julius Otto Grimm, in which he implores Grimm to “just let loose and create beautiful music!”, is expected to gavel for $6,000-$8,000. The massive archive of nearly 160 autographed signed letters pertaining to Benjamin Disraeli, who ruled Great Britain from 1874-1880, penned to his second secretary, Algernon Turnor, including a leather album, should hit $40,000-$50,000.

A letter typed in German and signed by Albert Einstein on Aug. 29, 1931, in which he praises a musician colleague about being a conscientious objector, has an estimate of $2,600-$2,800 and comes with an English translation. Several lots pertaining to Jackie Kennedy will be offered, to include a four-page signed letter, written to her mother from London in 1955, two years after her marriage to JFK in which she alludes to his early affairs, should change hands for $3,000-$3,500.

Speaking of JFK, and returning to the presidents, a single-page typed letter signed by JFK on White House stationery, addressed to Edna Kelly, a Congresswoman and trailblazer for women’s equality, dated Aug. 20, 1962, has an estimate of $2,000-$4,000. Also, a nicely preserved letter written and signed by Abraham Lincoln as president (co-signed by Salmon Chase as Secretary of the Treasury), concerning Lincoln’s home state of Kentucky, should command $5,000-$6,000.

A letter written and twice signed by Thomas Jefferson, dated July 9, 1792 while he was serving as Secretary of State, addressed to the Governor of Vermont with content regarding the revolts in Vermont and the Treaty of Paris, is expected to fetch $6,000-$7,000; while an autographed letter written by Ronald Reagan on presidential card stock to his good friend “Hup” McArthur, in which he thanks him for “my 43rd anniversary of the 39th birthday,” should make $1,000-$1,200.

As with all University Archives online auctions, this one is packed with important, scarce and collectible signed documents and other items relating to some of the most famous names in all of history. The firm has become world-renowned as a go-to source for rare material of this nature.

***Please note: Due to rising production costs, we are raising our buyer’s premium to 20% in-house and 25% online effective January 1, 2018. These rates are still significantly lower than other auction houses, and we are also one of only a few auction houses that handle our own worldwideshipping!