Our consignor calls these “The Most Highly Sought After NFTs in NBA Top Shot History,” and that might be underselling it.  In the May Sports Showcase Auction, which goes into extended bidding at 10 p.m. CST Thursday, Heritage Auctions will sell as a single lot three coveted Top Shots immortalizing the close-knit relationship between the greatest Los Angeles Lakers of the 21st Century and two of basketball’s all-time best: Kobe Bryant and LeBron James. This non-fungible token (NFT) trio, assembled by NFT developer The House of Kibaa and never before offered together, is expected to sell for more than $1 million.

That’s because these three moments are the very top Top Shots ever produced: 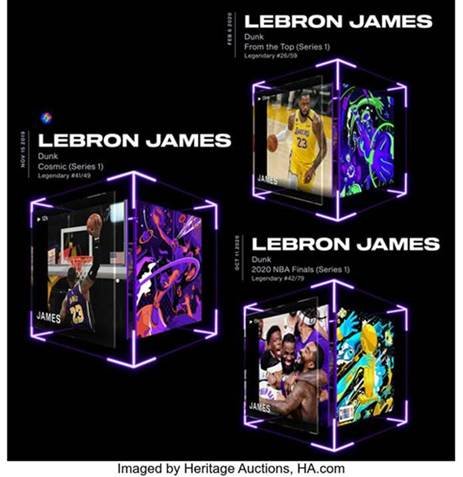 Within days of its debut, NBA Top Shot exploded into the collectibles industry, with collectors and investors alike securing NFTs from the biggest names on the hardwood. And there is no bigger name than King James, who pays homage to his “big brother” in this nearly impossible to obtain moments, beginning with James’ reverse slam dunk delivered less than two weeks after James’ death on Jan. 26, 2020. It was a perfect recreation of Kobe’s breakaway dunk against the Sacramento Kings 18 years earlier.

2020 LeBron James NBA Top Shot (Series 1) From The Top – Dunk #26/59 is, easily, the most iconic moment in the Top Shot universe, and this limited-edition offering is rife with significance: The serial number notes the date of Kobe’s death, and contains references to his jersey number Kobe (24) as well as that of his daughter Gianna (2). And when you add the two numbers, you get Kobe’s early-career jersey number: 8.

2019 LeBron James NBA Top Shot (Series 1) Cosmic – Dunk #41/49 comes from the most sought-after release among Top Shot collectors, the Cosmic set. It’s also the very first Legendary LeBron James ever minted, so rare and valued it’s not even listed for sale in the NBA Top Shot marketplace. The highlight is a monstrous James dunk the Kings. But its serial number, 41, is intended as a Kobe homage, too: He had only begun attending Lakers games again, and was 41 years old when this moment occurred.

2020 LeBron James NBA Top Shot (Series 1) NBA Finals – Dunk #42/79 comes from the Series 1 NBA Finals release, and celebrates the Lakers’ return to the NBA mountaintop. It features yet another authoritative throwdown from King James — during the 2020 NBA Finals, no less, during the title-clinching Game 6. James made it clear that Bryant was never far from his mind, or his heart, throughout this historic run to glory, and the No. 42 serial number evokes the Black Mamba with his reversed digit numbers. Kobe, too, would have been 42 old at the time.

After hoisting the Larry O’Brien Trophy, James posted to his Twitter feed an image of him posing with a Bryant jersey. He wrote, “Hope I made you proud my brother.”