A 1986 Fleer Michael Jordan rookie card with a “Pristine 10” grade will cross the auction block on Nov. 6, at Heritage Auctions in Dallas, and the price that it may fetch is an eye-opener:  $80,000+.

“We fully expected this card to meet and possibly exceed that price,” said Chris Ivy, Director of Sports Collectibles at Heritage. “This card is, undoubtedly, the most desirable and valuable trading card printed in the last half century.” 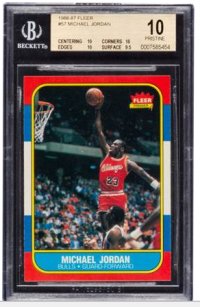 The card is making its auction debut in the Heritage event and is the single most perfect specimen ever to find its way into a grading company’s plastic slab.

This is not the first time a Jordan rookie card has been graded a “Pristine 10” from Beckett Grading Services, but it’s exceedingly important in the card collecting hobby and Beckett is a company known to elite collectors to be maddeningly discerning when it comes to its evaluation of modern cardboard.

“More than 7,400 Jordan rookies have been submitted to Beckett for grading,” said Ivy, “and only five have been worthy of a Pristine 10 designation. That calculates to approximately .0067 percent.”

When this card was certified, Beckett itself was well aware of the magnitude of this rating, trumpeting its emergence upon the cover of its Summer 2006 Beckett Basketball Card Plus magazine, saying “Centering doesn’t get any better! Razor-sharp Edges! Corners could be used as a weapon! Silky-smooth Surface! The first BGS Pristine 10 Jordan Rookie Card!”

“When it comes to His Airness, the sky is the limit,” said Ivy. “Jordan is as popular and collectible today as he has ever been and this card is proof of that.”