An archive of Thomas Edison’s lightbulbs, court evidence and the keys to his famed Menlo Park, New Jersey, laboratory where he invented the phonograph, sold for a combined $64,375 at a Dec. 3 public auction of Historical Americana held by Heritage Auctions in Dallas. The archive included six, 19th century lightbulbs tied to a famous court case, which had descended in the family of Edison’s own attorney for more than 100 years.

“These bulbs were entered as evidence when Edison sued three different companies for allegedly infringing on his patent for the incandescent bulb,” said Don Ackerman, a consignment director for Historical Americana for Heritage Auctions. “Edison’s own keys were used to open the doors of his laboratory was where the genius earned his nickname as “The Wizard of Menlo Park.” 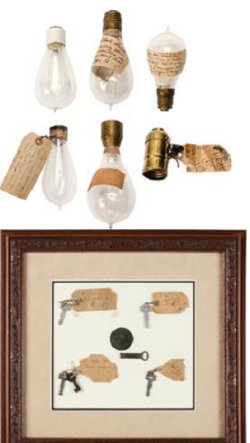 One bulb in the archive was created by Heinrich Göbel, a German inventor who claimed to have invented the incandescent lightbulb in 1868, years before Edison did in 1879. The bulb and related documentation sold for $23,750. Göbel did not apply for a patent, but served as a star witness against Edison when Edison sued three manufacturers of incandescent lamps who he claimed infringed against his bulb patents. The set of five bulbs used in the court case sold for $30,000.

“Both ‘original’ Goebel lamps and reproductions were offered as exhibits, but there was no proof that any of them were made prior to 1880,” Ackerman said. “This tactic by defense attorneys became known as the “Goebel Defense” and it has since been used in other similar cases.”
Multiple bidders pushed the auction price of the keys to $10,625. Consigner Charlie Knudsen, who acquired the items from his great aunt, who was married to one of the attorneys whose law firm represented Edison in patent lawsuits, was excited during the auction.

“This is such an important archive – I’m glad it will go to a good home, to someone who also appreciates Edison’s contribution to science and history,” he said.

Heritage Auctions is the largest auction house founded in the United States and the world’s third largest, with annual sales of more than $800 million, and over one million online bidder members. For more information about Heritage Auctions, and to join and receive access to a complete record of prices realized, with full-color, enlargeable photos of each lot, please visit HA.com.