Goldin Auction offers the very Heisman Trophy presented to Hall of Famer Tim Brown during his outstanding senior season at Notre Dame in 1987. Bid on this item in Goldin Auctions December 8, 2018 Holiday Auction here. Brown was the first wide receiver to ever win the Heisman as he recorded eight touchdowns via pass reception, rushing and punt returns in 1987, and finished off his college career with 137 receptions for 2,493 yards and 22 touchdowns. When he graduated, he held 19 school records for the most heralded college program of all-time. 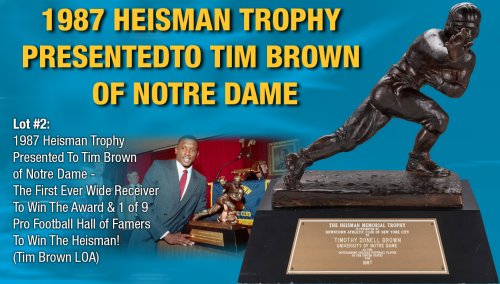 This award is a nice patina bronze figure—originally rendered in 1935 by noted sculptor Frank Eliscu, who used NYU star Ed Smith as his model—perches on a plinth measuring 6 ½ x 13 ½ inches, which is then mounted atop a trapezoidal black base spanning a perimeter of 10 ½ x 17 ½ inches. The gold-plated plaque reads, “THE HEISMAN MEMORIAL TROPHY IS PRESENTED BY DOWNTOWN ATHLETIC CLUB OF NEW YORK CITY TO TIMOTHY DONELL BROWN UNIVERSITY OF NOTRE DAME AS THE OUTSTANDING COLLEGE FOOTBALL PLAYER IN THE UNITED STATES FOR 1987.” The award is in excellent condition with only minor edge wear on the base. The Heisman Memorial Trophy is truly, as billed, “The Most Prestigious Award in College Football,” and one could make a strong argument for its prestige being paramount to any single-player award in sports. Since 1998, the Downtown Athletic Club has required its recipients to sign an agreement that the award they are given is not to be sold, making any Heisman trophies available for sale that much more rare. This comes with a LOA from Tim Brown himself.