Tua Tagovailoa, Kyler Murray or another college football star won’t be the only person receiving a Heisman Trophy on December 8th. Several hours after the presentation of the 2018 Heisman Trophy in New York City, Goldin Auctions will award Tim Brown’s 1987 Heisman Trophy to a fortunate collector who wins the iconic trophy in the Goldin Auctions 2018 Holiday Auction. The nearly 1000-lot auction will be open for bidding from Nov. 19 through Dec. 8 at GoldinAuctions.com.

The trophy is the original one presented to Brown in 1987 and the first-ever awarded to a wide receiver. That, coupled with Brown playing for Notre Dame and then going on to have a Hall of Fame career with the Los Angeles/Oakland Raiders, makes this a truly special offering. Brown is one of just nine Heisman Trophy winners enshrined in Canton and, from that group, only O.J. Simpson’s original trophy has been sold at auction.

“We believe this is one of the most significant trophies to ever be offered at auction,” said Ken Goldin, Founder of Goldin Auctions. “It’s truly the memorabilia trifecta, being the sport’s most prestigious and valuable award given to an NFL Hall of Famer who played at the most storied college football program.”
Earlier this year the Heisman Trophy presented to Rashaan Salaam sold for a record $399,608, surpassing the previous record of $395,240 for Bruce P. Smith’s 1941 trophy. 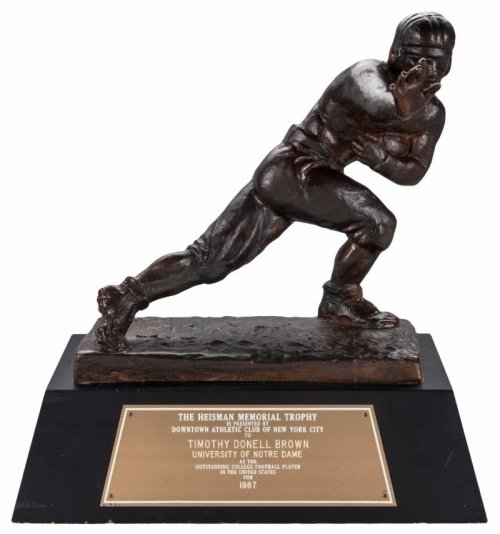