The very football from Tom Brady’s 624th career touchdown pass is a centerpiece of Heritage Auctions’ May 12-14 Sports Catalog Auction. The historic pass came in the fourth quarter of the Tampa Bay Buccaneers’ blowout win over the Carolina Panthers on Jan. 9, 2022.

Twenty yards, Brady to Mike Evans. Then, Mike Evans to lifelong Bucs fan Janice Greene, who went to Raymond James Stadium that day sporting her red Evans jersey in the hopes the wide receiver might leap into the stands and gift her the ball. Which he did. Because that’s what Evans does when he scores touchdowns.

And, because sometimes dreams do come true.

For now, Brady’s 624th touchdown throw holds the National Football League’s TD record by a wide margin; Drew Brees comes in second on the estimable list at 571 TDs thrown during the regular season. When Tom Brady retired on Feb. 1 of this year after a 22-year career as The Greatest of All Time, it was a given that his touchdown record would never be broken, nor even approached. 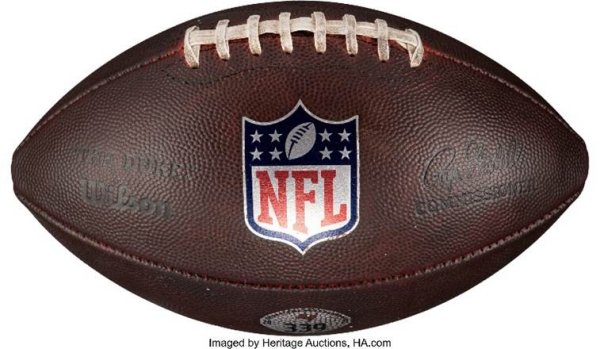 Then, a mere 40 days later, Tom Brady unretired. Which means that in all likelihood he will add to his touchdown record sometime this fall. Until Brady suits up for his 23rd season, Janice Green’s football is still the record-holding ball. But, likely, not for much longer.

On March 12, Green went to bed thinking she owned one of the world’s most valuable footballs, something whose sale could “be really life-changing.” On March 13, the occupational therapist, who works mostly with school-age children with special needs, got in her car and drove toward the sunset, “heartbroken” by the news that her favorite player had come out of retirement, determined to pile more touchdowns upon that mountain of records.

Days later Greene was in Dallas, at Heritage Auctions headquarters, to consign the ball she fell asleep holding the day Evans handed it to her. Because a blessing is a blessing no matter the size.

Click below to watch Janice Greene and Heritage Auctions Consignment Director Chris Nerat share the story of that historic football.