A treasure-trove of rare memorabilia from the collection of LaSalle University and Philadelphia Warriors/New York Knicks legend Tom Gola are on the Goldin Auctions block in the Holiday Auction which is underway and continues through December 12th and 13th.

The Tom Gola Collection is highlighted by his 1986 NBA All Star Ring (presented to him as a former player; Gola was a five-time All-Star) and a pair of Game-Worn jerseys, one a 1959 Warriors road jersey #15, and the second a New York Knicks #6 signed jersey from the from the early 1960’s.

A bevy of college awards-related trophies and plaques belonging to the Naismith Memorial Basketball Hall of Fame member are also up for grabs, including his “Certificate of Election” to the “Basketball Hall of Fame” dated 1975. Visit https://goldinauctions.com/Category/Thomas_Gola_Collection-268.html for the entire collection. 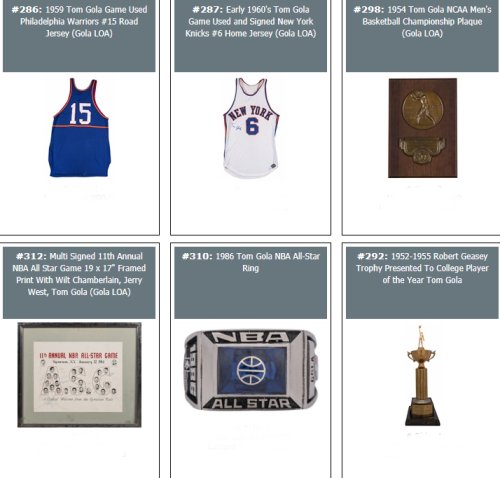