In 1999, Serena Williams first rookie card was released in the July 1999 Sports Illustrated For Kids issue alongside eight other star athletes. These cards were inserted as a perforated sheet within the magazine, and therefore were susceptible to a slew of condition issues – especially since the production quality was low and most were handled by kids. Since its release, only eight have managed to be encapsulated within a PSA 10 holder including this record-breaker.

Assessed as GEM MINT, boasting an overall cleanliness which is seldom seen. This card presents a gorgeous, perforated periphery with untouched corners and glorious surfaces. Void of common wear with vibrant color and a stunning player image. Since her debut, Serena has dominated in every facet, widely regarded as one of the greatest female tennis players of all-time, and one of the most dominate athletes in the world. She holds the most major titles in singles, doubles, and mixed doubles combined among active players and is the only American player, male or female, to win more than 20 majors. She also one of the most successful female athletes of all-time and is an iconic figure for young woman.

Impressively, Serena broke that previous record twice last night. This 2003 Netpro Elite Glossy Tennis Serena Williams Rookie card, of which only 100 exist, sold for $96,000 last night at PWCC’s Monthly Premier Auction. In 2003, NetPro released its beautiful 20-card Elite Tennis set which was home to the #2 Serena Williams rookie card which captured a great serving image. This factory set was shortly printed to 2,000 sets, each containing an ultra-rare ‘Glossy’ variation which was printed to only one hundred. The card sold is one of the one hundred variations of Serena’s #2 rookie card, and one of only twenty-six to be encapsulated within a coveted PSA 10 holder.

“We’re extremely excited to see both the $117,000 and $96,000 sales for Serena Williams’ cards as it reaffirms what many of us already knew: that she is the greatest of all time,” said Chris Callahan, Director of Marketing at PWCC.” The sales also highlight the rapid growth in women’s sports cards over the past year. Through 2021, we saw a few records set for women’s cards, but the $117,000 sale is definitely a major step up as it more than doubles the previous record. This also reinforces a larger story that assets beyond baseball, basketball, and football are seeing strong growth in the collectible space, and it’s a reason to be very excited about the state of the market.” 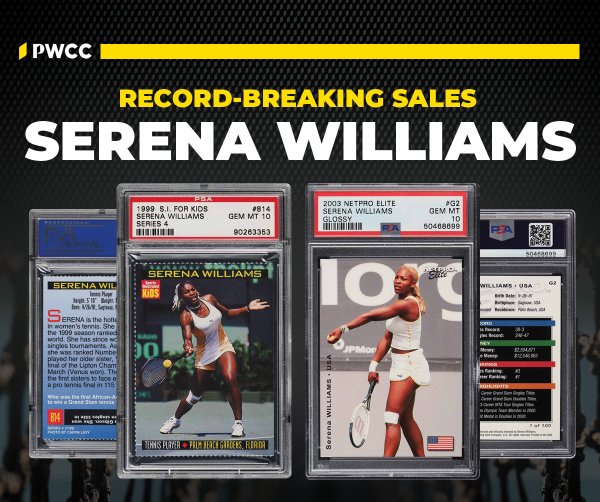