An examination of Tyrus Raymond Cobb’s baseball exploits presents quite the dilemma. What fueled the baseball legend’s brilliance more: his immense, myriad skills, or a competitive fire that made him one of the most feared — and in some circles, despised — players ever to lace up the spikes?   The answer, as is the case with many complex individuals like Cobb, was both.  Presented as an essential cache in Heritage Auctions’ Summer Platinum Night Sports Collectibles Catalog Auction Aug. 29-30 will be 31 lots representing the player some consider the greatest hitter of all time.

Cobb’s 1923-25 Ty Cobb Game Used Bat, is a rare opportunity to own a prime artifact from the all-time great. The battle-scarred signature model Hillerich & Bradsby boasts a flawless PSA/DNA GU 10 rating, along with the grip tape that the Baseball Hall of Fame’s first inductee favored – a rarity on Cobb collectibles – and dark staining from the tobacco juice he employed to harden the grain. The bat boasts incredible provenance, as it derives from the collection of fellow Hall of Famer Joe Sewell after it was gifted to him by Cobb in 1925. An inscription affirming that exchange was expertly removed by a subsequent owner, but the PSA/DNA letter of authenticity pictures the bat (estimate: $250,000+) both before and after that inscription removal. 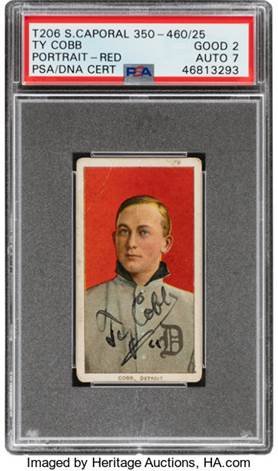 “Ty Cobb was one of the most feared hitters of all time, but he gave this to an opponent – Joe Sewell played his entire career for the Cleveland Indians and New York Yankees – which was unheard of from a player with Cobb’s reputation for spiking an opponent before giving out gifts,” Heritage Auctions Vice President Derek Grady said. “Combine his superior talent with his aggressive personality, and it’s easy to see why many did not enjoy playing against him. His memorabilia is absolutely coveted by serious collectors, and this bat is a museum-worthy piece around which an entire collection can be built.”

“The Georgia Peach” made the most of his physical talent with an analytical approach, relentlessly studying his opponents for any edge he could gain. Strategy, daring and quick thinking were hallmarks of his game, leading to 12 batting titles, a Triple Crown in 1909 and a 1911 season in which he led the American League in hits, runs, runs batted in, batting average and slugging percentage – every major offensive category except home runs – on the way to AL Most Valuable Player honors. Incredibly, he stole second base, third base and home in succession four different times in his career.

Those indomitable skills and laser focus were augmented by a burning will to win that became the stuff of legends. One of the most aggressive players in baseball history, he was widely disliked by opponents, fans, and even teammates for his take-no-prisoners style. Cobb was even accused of sharpening his spikes to damage infielders on one of his reckless slides. However, there is little doubt that his intense style of play and gritted teeth determination helped make him the finest player in baseball’s Dead Ball Era and the leader of baseball’s first Hall of Fame class.

“I never could stand losing,” Cobb said. “Second place didn’t interest me. I had a fire in my belly.”

With such an unparalleled amount of success, it stands to reason that the tools of Cobb’s trade would be among the hobby’s most revered.

The card’s official “Good 2” rating depicts a normal condition for the issue, while the “Auto 7” assessment perhaps undersells the pop from Cobb’s black fountain pen ink on the gray flannel of his Tigers jersey. A favorite among cultured collectors, this card is estimated at $100,000 – up and will be a coveted targeted when bidding commences.

Other Cobb highlights in the sale include, but are not limited to:

For images and information about these and all lots in the auction, visit HA.com/50029.