Ty Cobb’s bat. Willie Mays’ jersey. Tiger Woods’ first hole-in-one ball. Mike Tyson’s glove. A Hank Aaron card. A championship ring from the first Super Bowl. And, of course, a 1952 Topps Mickey Mantle (or two …).  These were just a few of collectors’ favorite things over the weekend in Heritage Auctions’ Nov. 17-19 Fall Sports Catalog Signature® Auction, which saw more than 3,700 bidders help set numerous records en route to a $22,149,071 finish. It was a fitting end to a history-making, hobby-altering year that saw the auction house set the record for the world’s most valuable sports collectible.

“I’ve been part of countless momentous auctions since founding Heritage’s Sports category in 2004, and it’s always a thrill to find new homes for incredible material from landmark moments and legendary players,” says Chris Ivy, Director of Sports. “This has obviously been an extraordinary year for us, one that saw us redefine the hobby and set hundreds of records, and we’re just delighted to end the year doing what we’ve always done: making history with history.”

During this three-day event, Ty Cobb came a spike’s length from touching the world record for a game-used bat: The Georgia Peach’s J.F. Hillerich & Son game-used and signed (and photo-matched!) lumber dating to the 1910-1914 seasons sold for $1.62 million, just shy of the $1.68-million mark set in August for a game-used and signed Babe Ruth bat. The bat is the most valuable Ty Cobb memorabilia ever sold at auction. 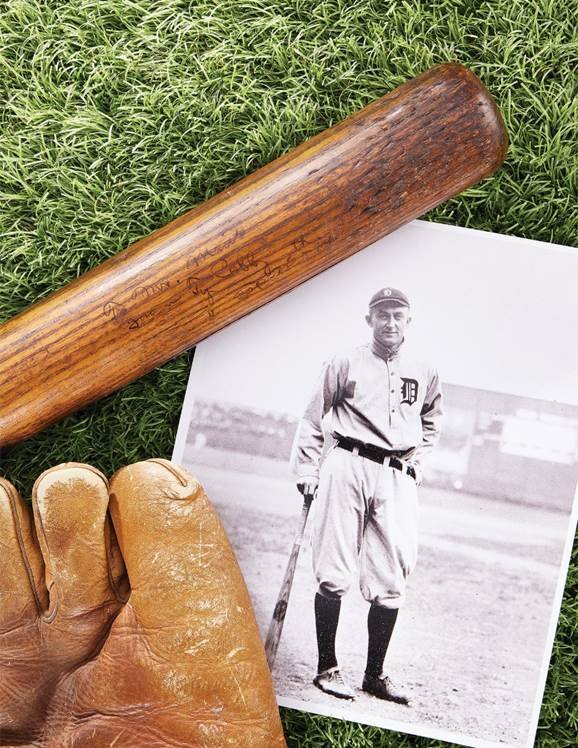 Until last weekend, no Willie Mays game-worn jersey had ever sold at auction for more than $220,000. The Say Hey Kid, the subject of a new documentary on HBO, had something to say about it in this auction, when a 1966 game-worn, photo-matched San Francisco Giants jersey sold for $456,000 to set a new record befitting one of the sport’s all-time greats.

And it wasn’t so long ago – only last year, in fact – that a 1952 Topps Mickey Mantle graded PSA NM-MT 8 sold for well under $1 million. But in the wake of August’s $12.6-million record-setter, Mantle’s near-mint offerings are among the most coveted cards in the hobby: One sold last weekend for $1.47 million. And a ’52 Mantle in a PSA NM 7 slab realized $468,000, a record for that grade.

The Mick wasn’t alone in standing atop the cardboard record pile over the weekend: The Left Arm of God himself, Sandy Koufax, saw his 1955 Topps rookie card graded PSA Mint 9 sell for $396,000, the highest price ever realized for the Dodger legend’s cardboard debut. A 1963 Topps Hank Aaron graded PSA Gem Mint 10 sold for $222,000, a new record for that Hammerin’ Hank classic in any grade. His 1954 Topps debut in a PSA Mint 9 also sold last weekend for $615,000, just shy of its record. And Dennis Eckersley’s 1976 Topps rookie card graded PSA Gem Mint 10 (one of only nine!) tossed a record-setter this weekend, scoring $60,000.

But not all the popped records came from bubble-gum cards: A 1947 Bond Bread Jackie Robinson rookie card graded PSA NM 7 sold for $62,403, the highest price ever realized for this card produced by the bread-maker during trading-card companies’ post-war hiatus. 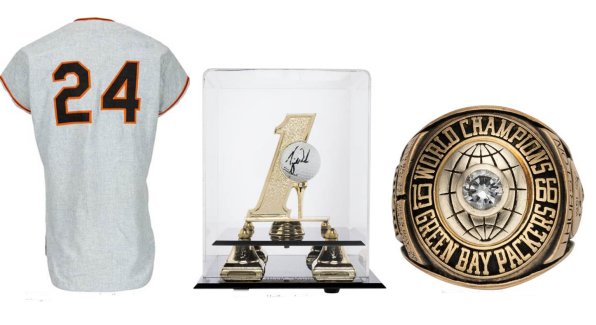 Before the auction even began, there was significant media attention paid to Tiger Woods’ signed hole-in-one ball sunk during his first pro tournament, the 1996 Greater Milwaukee Open. The signed Titleist in the specially made display did not disappoint: It realized $186,000 to become the most valuable golf ball in the world.

Only three months ago Heritage set the record for a Super Bowl I championship ring when Hall of Famer Dave Robinson’s jewelry realized a breathtaking $174,000. His teammate, offensive guard Frederick “Fuzzy” Thurston, ran over that highwater mark last weekend when Thurston’s Super Bowl I ring sold for $216,000.

And Mike Tyson punched his way into the record books last weekend, when a signed left-handed glove worn during the heavyweight’s first pro fight sold for $58,800. This red Everlast, worn during a first-round TKO at the Empire State Convention Center in Albany, N.Y., on March 6, 1985, is now the most expensive Tyson item ever sold at auction. Bidders, of course, fought over this one. But as Iron Mike famously said, everyone has a plan til they get punched in the mouth.