Collectors pounced on a pair of historic typewriters author Larry McMurtry used to write Lonesome Dove for $37,500 Wednesday, March 8, 2017 at a $1.8+ million public auction of rare books held by Heritage Auctions. The novel was a genre-defining opus and reinvigorated the western literature scene.
The Swiss-made Hermes 3000 is one of the world’s finest typewriter models and the instrument of choice for thousands of writers. It was introduced in 1958 and was noted for its simplicity and ease of maintenance. The pair on offer is dated between 1963 and 1970 with pale green bodies and keys. Each has its original case and exhibits only light scuffs and handling marks. McMurtry stationed one at his home in Archer City, Texas, and the other in Washington, D.C., while writing Lonesome Dove. McMurtry still uses a Hermes 3000, writing five pages every day to avoid “the empty well.” 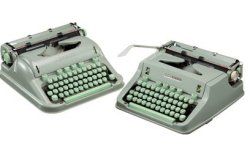 Lonesome Dove follows a pair of Texas Rangers in a 1,500-mile cattle drive in the Old West. The 843-page epic was an instant success, earning McMurtry the 1986 Pulitzer Prize for Fiction. CBS adapted the story into a miniseries starring Robert Duvall three years later. More than 28 million people watched the miniseries, which won seven Emmys.

The auction rounded out with Neal Cassady’s THE JOAN ANDERSON LETTER to Jack Kerouac selling for $206,250; Kerouac’s original typescript for The Dharma Bums selling for $137,500; and Thomas Jefferson’s own copy of The Laws of the United States of America, which sold for $156,250.