A lot consisting of 98 pages of notes in former President John F. Kennedy’s hand from the 1960 presidential campaign highlights a group of important Kennedy memorabilia offered in Heritage Auctions’ Dec. 3 Americana & Political auction. The papers’ opening bid is $25,000, but that could prove conservative, according to Tom Slater, Director of Americana Auctions at Heritage. 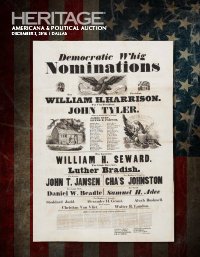 Kennedy’s notes were drafted at a notable time in his Presidential campaign, because he was suffering from laryngitis. The candidate had spoken so often on the trail that he had all but lost his voice. He was under doctor’s strict orders to avoid speaking whenever possible, especially in the noisy cabin of his prop-driven campaign plane, “Caroline.”

Based on context, a number of these notes appear to be from the April and May time period, after his April 5 victory in the Wisconsin primary (a 56-44 percent win over Hubert Humphrey) through the May 10 West Virginia primary, which was of major concern to him.

The candidate communicated by scribbling notes on a legal pad, a number of which were preserved by his airborne “Gal Friday,” Janet DesRosiers. These candid notes — which never were published — present important insights into Kennedy’s personality and character, as well as providing a revealing glimpse of the inner workings of a political campaign.

“The circumstances dictated that here was no filter when Kennedy was dashing these off,” Slater points out. “We never have encountered anything quite like them before.”

The entire archive is being offered as one lot, with a minimum opening bid of $25,000. 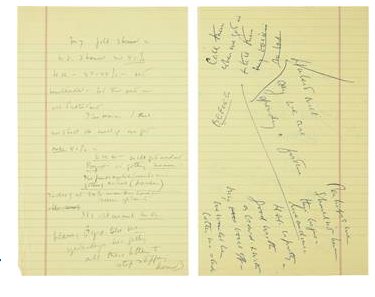 A one-of-a-kind Sterling Silver Tiffany Cigarette Box bearing the Presidential Seal, displayed in Kennedy’s oval office, also is featured in the December auction. “While any objects personally owned by President Kennedy are highly collectable, those used in the Oval Office hold a particular allure for collectors,” Slater said.

“This particular box, formerly in the renowned Robert White collection, is especially well-documented, having come from Martin E. Underwood, a Special Assistant to Presidents Kennedy and Johnson,” Slater said. Bidding will open at $20,000.

The auction also includes a historic Kennedy-signed document: his formal acceptance of his nomination by New York State’s Liberal Party as its 1960 presidential standard bearer. Without the liberal vote, Kennedy would have lost New York State and the presidency to Nixon, whose Republican vote total actually exceeded the number of votes cast for Kennedy as a Democrat. The crucial document opens with a $15,000 bid.

Additional highlights from the many Kennedy items in the auction include, but are not limited to: