Items signed by George Westinghouse, Abraham Lincoln, Ronald Reagan, Martin Luther King, Jr and many more of history’s brightest luminaries will come up for bid in an online-only Rare Autographs, Manuscripts & Books auction slated for Wednesday, August 19, 2020, by University Archives, beginning at 10:30 am Eastern time. The full catalog, showing all 351 lots, is up and online for bidding and viewing now, at the newly revamped University Archives website (www.UniversityArchives.com), as well as the platforms LiveAuctioneers.com, Invaluable.com and Auctionzip.com. Phone and absentee bids will also be accepted. 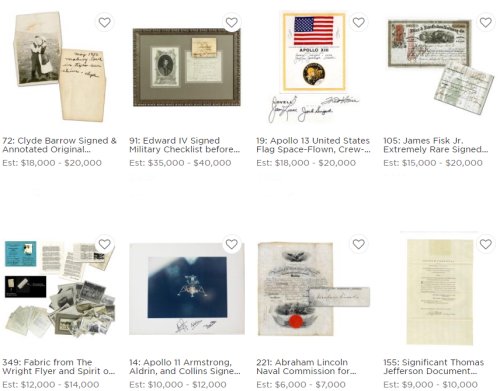 Civil War collectors, take note! 40 Civil War related lots will be offered, among them a Brady Studio albumen photograph of Abraham Lincoln, of unusual imperial size (8.125” x 6.5”), and with affixed full signature as “Abraham Lincoln.” Lincoln collectors will also love a war-dated military commission appointing a chaplain in the U.S. Navy, signed by Lincoln without the usual folds affecting an especially bold signature. A 1p autograph letter signed by Jefferson Davis and addressed to Secretary of War James A. Seddon in August 1864, at a significant time for the Confederacy, “when it only remains to mourn the evil effect thus entailed on our cause in this critical hour” foreshadowed the catastrophic end of the war. Also featuring autographs from dozens of Civil War celebrities—drawn equally from the Union and Confederacy–and even including an extremely rare George S. Pickett signature with rank.

Aviation/Space collectors will be over the moon with our marquee selection of 25 lots. Among the highlights are an Apollo XI photograph depicting the Lunar Module “Eagle” signed by Neil Armstrong, Buzz Aldrin, and Michael Collins; and an American flag flown aboard the Apollo XIII mission affixed to a NASA certificate signed by Jim Lovell, Jack Swigert, and Fred Haise, from the Estate of Jack Swigert. Other material relates to Amelia Earhart, Charles A. Lindbergh, and Yuri Gagarin. PSA/DNA slabbed and graded official NASA red number photographs and colorful embroidered badges complete the category.

28 lots relate to the history of the U.S. Supreme Court, ranging from its inception in the eighteenth century to modern jurisprudence. The premier item among these is a 1p early autograph letter signed by future 4th Chief Justice John Marshall, with interesting legal content.

Nearly 2,000 pieces of political campaign memorabilia will be offered in 23 large dealers’ lots, documenting a century of American political history. Featuring unusual jugates, coattails, and flashers from the presidential campaigns of FDR, JFK, LBJ, Truman, Eisenhower, Nixon, Ford, Carter, Reagan, and others, from 1896-1996. There are many gems waiting to be discovered within this completely unpicked collection of a Greenwich, Connecticut gentleman.

Presidential collectors have never seen the like: the original anesthetic instruments used by emergency room physician Dr. M.T. Pepper Jenkins to attempt to resuscitate JFK at Dallas’s Parkland Memorial Hospital on November 22, 1963. The instruments were immediately removed from Trauma Room #1 after the president’s death, and are accompanied by an archive assembled by Dr. Jenkins, including his impressions from that day. In part: “[there was] the cyanotic look on the President’s face, the gasping agonal attempts at respiration, a dying heart pattern on the EKG…”

Nearly 30 lots from the Jack Kerouac Estate will be offered, ranging from the Beatnik’s personally owned books and papers, to original artwork and other treasured possessions. One of two original pencil drawings by Kerouac is entitled “The Vision of Dipankara,” depicting one of the foundational semi-mythical stories of Buddhism. Kerouac has added daubs of oil paint and signed the abstract work “Jean-Louis Kerouac.” Kerouac’s personally read copy of Alan W. Watts’s classic text “The Way of Zen” signed and inscribed with his possibly unpublished haiku as “1961 / Autumn – old rivalries / are worse, old / Friendships are deeper / JK” is sure to intrigue collectors. Other highlights include Kerouac’s personally owned Leica camera, ca. 1947-1951, from the On The Road-era, and a Kerouac signed check made out to San Francisco’s City Lights Books, the West Coast hub of the Beatnik Movement.

Literary collectors will also be interested in two unusual guns from the personal collection of Ernest Hemingway. One of them is a circa mid-nineteenth-century North African brass-decorated Kabyle musket measuring over 5’ in length, obtained during Hemingway’s ill-fated 1953-1954 trip to Africa (when Hemingway and his wife survived two back-to-back near fatal plane crashes.) The guns are from the collection of 102-year-old A.E. Hotchner, Hemingway’s biographer, close friend, and confidante.

It should be fun. We hope you can join us!