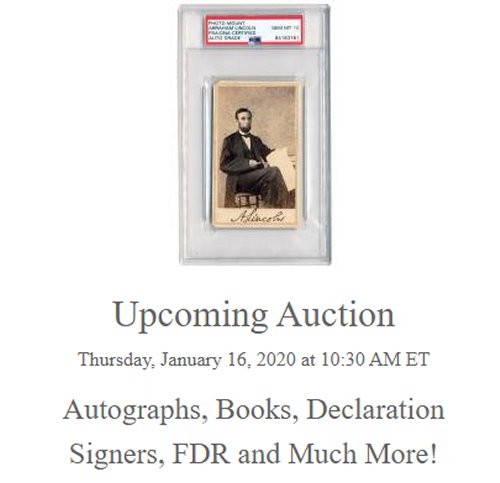 A book and a carte de visite photograph both signed by Abraham Lincoln, a matador outfit owned by Ernest Hemingway and later gifted to his best friend and biographer A.E. Hotchner, and a Second Congress document signed by Thomas Jefferson are just a few of the expected top lots in University Archives’ next big auction, slated for Thursday, January 16th.

The 283-lot online-only auction, starting at 10:30 Eastern, is packed with unique relics, photos, autographs, books and ephemera, to include 55 of the 56 Declaration of Independence signers (all except Button Gwinnett), plus presidential items (high-ticket Lincoln, Jefferson, Washington, Teddy Roosevelt, Richard Nixon and others, with 12 lots alone dedicated to Franklin Roosevelt).

Also offered will be literary items (including five lots of Hemingway), music (the Beatles, Elvis Presley, Jimi Hendrix and others), entertainment (Marilyn Monroe, Harry Houdini and others), and science (to include Edison, Einstein and Freud, with a special emphasis on psychology).

“We’re starting the New Year — and the new decade — with a blockbuster sale,” promised John Reznikoff, president and owner of University Archives. “Our first 68 lots, or nearly one quarter of the entire sale, is dedicated to autographed material from 55 of the 56 Declaration signers. The group includes very rare signers, such as Thomas Lynch, George Taylor and Arthur Middleton.”

Mr. Reznikoff added, “We also have outstanding pieces representing psychology, science, space, entertainment, music, US Presidents, the Supreme Court and World War II. Start off 2020 with a New Year’s Resolution you’ll be glad you kept and will bring great joy for years to come: begin or add to your collection of superb historical autographs and collectibles starting January 16th.”

The Abraham Lincoln signed carte de visite, PSA/DNA encapsulated and graded Gem Mint 10, is after an Alexander Gardner portrait and was signed by Lincoln during wartime, circa August 1864, when it was probably presented to its dedicatee, Ohio Infantry Regiment officer Colonel Benjamin Rosson. The CDV was preserved in Col. Rosson’s wife’s Victorian scrapbook album until it was recently discovered by treasure hunters in an antique store (est. $50,000-$100,000).

An even higher estimate ($100,000-$120,000) has been assigned to a book owned by Lincoln that was formative to his views on slavery. The volume boasts 100 years of provenance, which includes an ownership signature by Lincoln, as given to him by his brother-in-law, later inscribed by his law partner and biographer William Herndon, and finally gifted to a prominent American feminist writer of the 19th century. The book was written by a prominent Irish literary figure.

The 12 lots relating to Franklin Roosevelt include a phenomenal presentation copy of Addresses of Franklin D. Roosevelt and Winston Churchill — a war dated book issued by the White House and including the United States’ Declaration of War against Japan. The volume, presented in the publisher’s slipcase, was given to First Lady Eleanor Roosevelt and inscribed by FDR as: “For E.R. A month’s episode, with much love from FDR Christmas 1942” (est. $20,000-$24,000).

Bibliophiles will relish the five lots pertaining to American novelist Ernest Hemingway, from the collection of 102-year-old A.E. Hotchner, Hemingway’s biographer, close personal friend and confidante. Among these treasures is a black and white photo of the two men trudging through snow laden with their hunter’s catch, personally signed and inscribed by Hemingway, “To Hotch from his pal Mr. Papa” (est. $5,000-$6,000). Included is a letter of authenticity from Hotchner.

Hemingway’s passion for Spain and bullfighting is well-documented. A unique lot personally owned by Hemingway is the 1960 “Suit of Lights” worn by Hemingway’s friend, the Spanish matador Antonio Ordonez (est. $25,000-$30,000). Hemingway purchased Ordonez’s three-piece matador outfit — encrusted with jeweled ornaments, metallic thread, sequins, and tassels — after profiling him in a series of magazine articles, later published as a book The Dangerous Summer.

A pristine document from the 2nd Congress, boldly signed by Thomas Jefferson, regarding a lighthouse at Cape Fear, framed to an overall size of 20 inches by 29 inches and signed (in print) by Washington and Adams, should realize $10,000-$12,000. Also, a one-page letter written and signed by George Washington while he was President in April 1791, to his nephew George, with slavery content and concerns about Mount Vernon and its crops, should go for $15,000-$20,000.

A letter written and signed by George Taylor, the third rarest Declaration signer, one page, dated May 31, 1779, with war content, is estimated at $20,000-$24,000. It’s one of only a few known letters by Taylor. Also, a two-page letter written and signed by William Whipple, a Declaration signer, dated July 21, 1783 and penned from Portsmouth, N.H., to his brother, regarding business matters, including prospects for an excellent grain crop, should change hands for $3,000-$3,500.

A large portrait photograph signed by Theodore Roosevelt while he was President, dated April 30, 1906, with a long inscription from Roosevelt to Pope Pius X, matted and framed to a size of 25 inches by 29 ½ inches, is expected to fetch $15,000-$17,000. Also, a four-page typed contract document, dated February 24, 1885 and signed by iconic inventor Thomas Edison, in which his electric company agrees to power the trains in New York City, should command $4,000-$5,000.

A one-page letter handwritten and signed by Marilyn Monroe (as “Marilyn”), undated but probably from the early 1950s, to Lefty O’Doul, Joe DiMaggio’s mentor, with the handwritten transmittal envelope, has an estimate of $10,000-$12,000. Also, a vintage black and white photo, circa 1962, with all four Beatles on one side and the full signatures of all four on the back, 3 ½ inches by 5 ½ inches, in a 6 inch by 9 inch Beckett encapsulation, should achieve $4,000-$5,000.

A postcard handwritten by Sigmund Freud, dated August 25,1920, addressed to Edward Bernays, the Austrian-American public relations and propaganda pioneer, written at the height of “Freudmania”, is expected to bring $4,000-$4,500; while a single-page typed letter, signed by Albert Einstein and dated February 29, 1953 (a leap year), in which Einstein grants permission to Dr. Walter de Francois to be quoted in a letter Einstein wrote in 1935, should hit $3,000-$3,500.

The catalog has already been posted online and bidding is available via LiveAuctioneers.com, Invaluable.com and Auctionzip.com. Telephone and absentee bids will also be accepted. Folks can visit the website and browse the full color catalog now, at www.UniversityArchives.com.