This is your chance to buy Rare Books, Manuscripts & Relics, Forbes Collection Part I, Jack Kerouac Estate in the current University Archives auction. Join University Archives on March 25, 2020 at 10:30am EST.  Bid, register and view items from the auction here .

Introducing the Forbes Collection Part I, highlighting 45+ lots of phenomenal items deaccessioned from the collection of Malcolm Forbes (1919-1990), the multimillionaire magazine publisher and discriminating collector of Americana. Highlights include a clean and bright first edition copy of George III’s infamous Stamp Act proclamation as well as an archive of ten letters signed by William Pitt the Elder in 1773, just a few years before the American Revolution, in which he wrote: “Things seem to be hastening to a crisis at Boston… I look forward to the time with very painful anxiety. The whole constitution is a shadow…” The pièce-de-résistance is an April 1, 1861 letter twice signed by Abraham Lincoln, inscribed by military officers Montgomery C. Meigs and David D. Porter, and endorsed by Secretary of War Gideon Welles. Not only does the date make this letter exceptional, but its content and subtext are also significant. Revealed within is a conspiracy to thwart Lincoln’s cabinet members and the President himself on the eve of the Civil War! 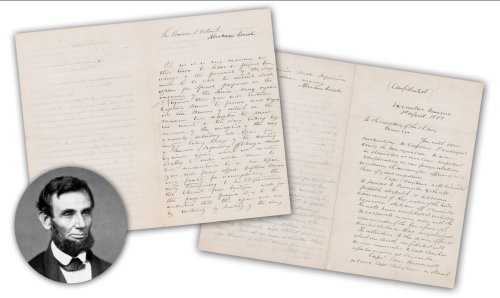 Check out the latest installment of items from the Jack Kerouac Estate Part II, including 45 lots of Kerouac’s compositions, books, and beloved possessions, directly from his Estate. A continuation of our tremendously popular February 26th sale, Jack Kerouac Estate Part II includes Kerouac’s own first edition copy of his 1957 classic On The Road; a pencil drawing entitled “Weird Self-Portrait at Sea” signed by Kerouac as “Jean Louis Kérouac”; and Kerouac’s much-loved silver-toned crucifix attached to a jute cord. Other memorable Kerouac items range from his original haiku poetry and voice recorder, to cocktail glasses, Bohemian tunics, and even underwear! Items will be accompanied by estate certification signed by John Shen-Sampas, executor of the Kerouac Estate by descent.

This month, we are also celebrating Music, Arts, and Letters. Featuring an impressive array of music memorabilia from Piotr Tchaikovsky, George Gershwin, The Beatles, George Harrison, Bob Dylan, Freddie Mercury, Janis Joplin, The Who, David Bowie, and U2, including a rare first UK pressing of the debut EP, Twist and Shout, of The Beatles, the cover of which is signed by all four rock stars! Alexander Calder and Frank Lloyd Wright jockey for prominence in our Art category, while F. Scott Fitzgerald, Walt Whitman, Edgar Allen Poe and others round out our formidable Literary category.