University Archives is delighted to announce its upcoming sale on April 14, 2021, when 356 lots will cross the auction block. This sale is particularly strong in the Presidential, Science, Foreign, and African American collecting categories, though Maps, Early American, Literary, Civil War, and World War II are also well-represented. You’ll be able to find just what you’re looking for among our many fabulous autographs, manuscripts, rare books, relics, and historic collectibles.

The full catalog is up and online for bidding and viewing now, at the newly revamped University Archives website (www.UniversityArchives.com), as well as the platforms LiveAuctioneers , AuctionZip and Invaluable. Phone and absentee bids will also be accepted. 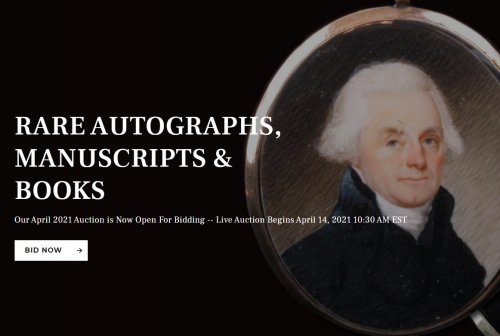 PRESIDENTIAL
From Washington to Biden, we’ve got U.S. Presidents covered. One of the highlights of our presidential category is an exquisite portrait miniature of Thomas Jefferson attributed to British miniaturist Robert Field, featuring two distinct hair locks of 1,000 strands or more visible under glass and a monogrammed “TJ” cipher on the reverse. One of the hair locks belongs to Jefferson; the other hair donor is open to speculation. John Reznikoff, owner of University Archives and a 2014 Guinness Book of World record holder for the largest hair collection in the world, was thrilled to see this piece. To his knowledge, no Jefferson hair relics have recently appeared on the market except for a small lock now in Reznikoff’s own collection. Also up for sale is a 1p autograph letter signed by Thomas Jefferson dated October 26, 1817 pledging to pay his taxes with profits from wheat flour milled at Monticello. The letter was addressed to Jefferson’s agent in Richmond.

In March 1944, President Franklin D. Roosevelt wrote a remarkable typed letter signed to Indiana Bishop John F. Noll regarding the imminent Allied invasion of Fascist-controlled Rome and the Vatican City. Noll was horrified at the destruction of a medieval Italian monastery at Monte Cassino by Allied bombardment the previous month. Acknowledging that unfortunate collateral damage, FDR wrote: “I earnestly hope that the present campaign will develop in such a manner as to permit the Allied forces to circumvent Rome and spare the Eternal City from war’s devastation…Our commanders in the field are under instructions to spare those shrines which are so dear to the heart of the Christian and civilized world.”

SCIENCE
University Archives is quickly earning a reputation as sourcing the best Albert Einstein material available on the market. We sold all seven Albert Einstein lots at our March 3rd sale, often exceeding estimates; our followers will remember the Einstein Unified Field Theory manuscript which sold for $46,875 including buyer’s premium, as well as the signed and inscribed life-size wax mold of Einstein’s head which sold for $28,125 including the tip.

Our April 14th sale offers an additional seven lots of the same outstanding caliber, including four autograph letters signed, one typed letter signed, one signed book, and Einstein’s personally owned children’s game. In a humorous letter that “patron saint” Einstein wrote to members of a fan club in 1928, he advised his followers to “Seek to understand everything, despise no one, [and] believe nothing blindly”; the letter is accompanied by a fine vintage photograph. Einstein’s personally owned children’s game from 1870s Germany, the Mosaic Pearl Game, comes with provenance from Albert Einstein’s grandson’s wife Aude Einstein-Ascher. Young Albert inserted 520 colored wooden pearl beads into a metal punch-hole frame to make shapes and letters, and perhaps even scribbled on the inside of the game box! Last is the Einstein God letter, in which the Nobel Prize-winning physicist told a close friend, “…for God, too, the creation of the world must have been a pointless luxury, yet He went ahead.”

FOREIGN
Our April sale offers a splendid assortment of Foreign material from across countries and centuries. One of the featured items of this category is a phenomenal 3pp letter written by Paul Gauguin to his friend, mentor, and fellow artist Camille Pissarro. In the letter, Gauguin questioned fundamental ideas about art, artists, and artistic methodology, and referred to famous artists Peter Paul Rubens, Jean-Baptiste-Camille Corot, Eugène Delacroix, Jean-François Millet, Gustave Courbet, Pierre-Auguste Renoir, and Armand Guillaumin.

In a 3pp autograph letter signed by Adam Smith, the Scottish economist discussed differences in exchange rates, a subject he would expand in his seminal 1776 monograph “The Wealth of Nations.” Smith also touched upon the inculcation of financial and moral responsibility, and other matters relating to money, in this December 3, 1759 missive addressed to the 1st Earl of Shelburne from Glasgow.

April also offers four lots relating to the Russian czars, including a Czar Alexander III personally owned bound set of lavishly illustrated French weekly news journals from July-December 1887. The impressive volume features Alexander’s giant 3” tall manuscript “A” in red pencil on about 16 of the weekly titles, as well as Alexander’s personal bookplate, and a Russian Imperial Library Stamp from the Gatchina Palace.

AFRICAN AMERICAN
Muhammad Ali and Malcolm X are just two of the significant African American historical figures featured in our April sale. Of especial interest is a presentation copy of “The Holy Quran” signed and inscribed by Muhammad Ali to Drew Brown, his friend, trainer, corner man, and adviser, as “To Drew Bundini Brown / From / Muhammad Ali / Your Brother / Make your life, / for the work of / Allah / 20/6/75 / Peace + Love / Forever.”

Malcolm X penned a phenomenal 2pp autograph letter signed from Cairo, Egypt on August 9, 1964, shortly after completing his pilgrimage to Mecca. Malcolm confided to friend Earl Grant that “if the Afro Americans get any support in our struggle for Human Rights it will come from the Muslin World…” Malcolm X three times signed a banking document as “Malcolm X Little” in his capacity as President of The Muslim Mosque, Inc. on April 2, 1964, just two weeks after breaking with Elijah Muhammad and leaving the Nation of Islam. An alternative to the Nation of Islam, The Muslim Mosque, Inc. disbanded following Malcolm X’s assassination less than one year later.

These are just a few highlights from our April sale; check out our catalog for more amazing lots. We hope you can join us!