The auction will conclude on January 6, 2021, by University Archives, beginning at 10:30 am Eastern time. The full catalog is up and online for bidding and viewing now, at the newly revamped University Archives website (www.UniversityArchives.com), as well as the platforms LiveAuctioneers.com, Invaluable.com and Auctionzip.com. Phone and absentee bids will also be accepted.

We keep breaking our own records at University Archives. When we launched our largest-ever 349-lot sale back in August, we did not expect to break that record again just four months later, but we did. University Archives is thrilled to present its BIGGEST sale to date: a sensational 440-lot extravaganza of amazing and unusual autographs, historical documents, rare books, manuscripts, collectibles, relics, coins, and currency. Collectors of Science, Presidential, Foreign, Kennedyiana, and Space / Aviation, come ring in the New Year with us! 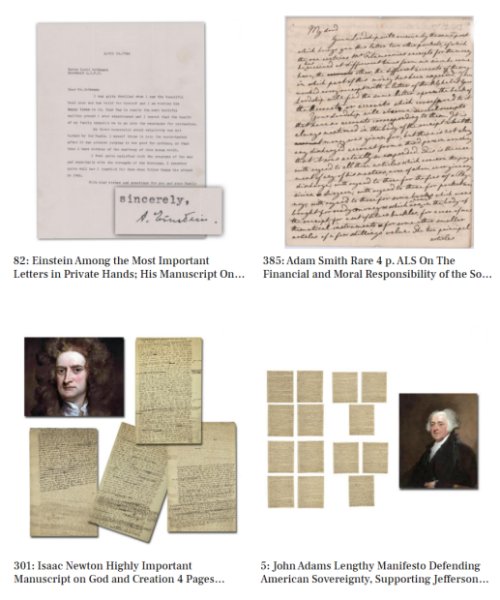 SCIENCE
Among the gems of our Science category is a 4pp manuscript comprised of nearly 2,300 words written entirely in the hand of English physicist Sir Isaac Newton. In it, Newton seeks inspiration from the Kabbalah, early Christian philosophers, and biblical texts to connect metaphysics to physics, thus uniting the abstract world with the concrete world he had partly decoded by discovering gravity. The length and subject matter of this manuscript, along with its outstanding provenance, make this an exceptional find. Half a dozen lots relating to Albert Einstein, Newton’s twentieth-century successor, will also cross the auction block, including two typed letters and two autograph letters signed. In a World War II-dated letter in English, Einstein revealed that the Third Reich did not give much thought to his Theory of Relativity. He wrote: “My first manuscript about relativity was not burned by the Nazis. I myself threw it into the waste-basket after it was printed judging it was good for nothing…” A letter written by Einstein in German 10 years later discussing his Unified Field Theory—as well as the behavior of matter in space and in motion—was penned in the very year of his death and anticipates his scientific legacy. A Charles Darwin 3pp autograph letter signed referring to his beloved friend and mentor, Scottish geologist Sir Charles Lyell, is significant, and is enhanced by a desirable full signature. Outstanding material relating to other great physicists, biologists, psychologists, chemists, and inventors can also be found, from Max Planck, Niels Bohr, and Sigmund Freud, to Henri Becquerel, James Clerk Maxwell, and Antoine Lavoisier.

PRESIDENTIAL
Our customers know that we offer the best Washingtons, Jeffersons, Lincolns, Kennedys, Roosevelts, and Reagans on the market. Presidential treasures this month include a 16pp autograph letter signed by John Adams, which to our knowledge is the longest letter in private hands, in which he opined about the state of current political affairs eight years after his presidency ended. In the letter which he intended for eventual publication, Adams excoriates British policies undermining American sovereignty–like the impressment of American sailors– and also lends support to his erstwhile political rival Thomas Jefferson, who had just two months himself remaining in his second presidential term. Featured also are a 2pp Revolutionary War-dated letter signed by George Washington, commenting on the courage of Patriot troops during the ongoing Battle of Yorktown; and a Civil War-dated military commission signed by Abraham Lincoln for a veteran officer of the Battles of Fredericksburg, Chancellorsville, and Gettysburg who would succumb to war injuries in May 1867. Last, a superb autograph letter signed by Thomas Jefferson is sure to generate interest.

FOREIGN
The finest autograph material relating to world leaders and world thinkers will be offered. In an exceptionally rare 4pp autograph letter signed by Scottish economist Adam Smith, he discussed the financial habits of one of his pupils, an Irish aristocrat’s son. Smith, the theorist who conceived of “the invisible hand” and other foundational principles of laissez-faire economics, assured his protégé’s father that the young man showed great prudence with money. Future British Prime Minister Winston Churchill, tasked with demobilizing military forces after World War I, sent a typed letter signed to the Prime Minister of the Union of South Africa regarding black soldiers in 1919. In addition, over 50 strands of Napoleon’s hair, collected by his Irish surgeon and then gifted to the Protestant chaplain on St. Helena, will be accompanied by extensive provenance information. Other pieces relate to King Francis I, Emperor Hirohito, Nikita Khrushchev, Otto van Bismarck, David Ben-Gurion, Che Guevara, Queen Victoria I, and others.

KENNEDYIANA
January will showcase more items from the estate of Father Ronald Hoskins (1949-2020), the noted assassinologist and collector of John F. Kennedy memorabilia, with an additional 107 lots relating to John F. Kennedy, Jacqueline Kennedy, John F. Kennedy, Jr., Robert F. Kennedy, Rose Kennedy, Lee Harvey Oswald, Jack Ruby, Sirhan Sirhan, and others. Among these highlights is a 3pp autograph letter signed by Lee Harvey Oswald as “Your Brother / Lee” sent from the Soviet Union during the spring of 1961. In it, Lee promises to return to the United States “if I can get the government to drop charges against me, and get the Russians to let me out…” Future First Lady Jackie Kennedy, as a 16-year-old high school boarding student at Miss Porter’s School in Farmington, Connecticut, has doodled a heart and dedicated a vintage black and white photograph to a chum named Betty as “Dear Betty / This / [arrow pointing to the heart] is brimming over / with love  / for you — / Lots of Love / Jackie XO.”

SPACE / AVIATION
American and Soviet aviation and space exploration are well-represented by an array of autographs, signed photos, color film negatives, and unusual relics. You can even own a gorgeous Wright Brothers display, comprised of an Orville Wright signed check, a fabric swatch from the Kitty Hawk “Wright Flyer,” and a nickel turnbuckle from an early Wright biplane.

And there are so many more intriguing lots to discover!  We hope you can join us on January 6th.