University Archives’ is excited to announce its next online-only sale, Rare Autographs, Manuscripts & Books, which will take place on December 14, 2022 at a brand-new start time of 11:00 AM EDT. At over 380 lots, the sale presents an exciting opportunity to acquire superb historical documents, relics, photographs, artwork, and ephemera.

All 380+ lots are up for viewing and bidding now (on the University Archives website: www.UniversityArchives.com), plus LiveAuctioneers.com, Invaluable.com and Auctionzip.com. Phone and absentee bids will be taken, but there’s no live gallery bidding.

University Archives is thrilled to announce its next sale on December 14, 2022 at 11:00 EST. At over 380 lots, Rare Autographs, Manuscripts, & Books is especially strong in the following collecting categories: U.S. Presidential, Science/Space, Militaria, Early American, and International/World Leaders. The variety and scope of our sale—from Civil Rights and Judaica to Literature, Art, and Music–guarantees that there is something for everyone, especially holiday gift-givers. If buyers pay with cleared funds by December 16th, their items will be shipped by December 21st and will hopefully arrive by Christmas, Hanukkah, or Kwanzaa.

George Washington boldly signed a free frank addressed to Benjamin Tallmadge, Culper Ring spymaster. The free frank is undated, but originally contained a December 26, 1782 letter commending the “signal gallantry of Captain Caleb Brewster,” referring to one of the underground’s principal couriers. Brewster often undertook covert missions in his whaleboat in Long Island Sound, with this mission resulting in the capture of two British gunboats. The free frank has tremendous visual appeal and tells a great story.

Thomas Jefferson wrote a 2pp autograph letter signed on October 11, 1812 describing how Americans had become beneficiaries of the Napoleonic Wars. Though Bonaparte’s “capricious passions & commercial ignorance” threatened American access to some European ports, his shenanigans in the Peninsula and Baltic distracted the British from their other declared enemies, the United States, during the six-month-old War of 1812. Jefferson triumphantly concluded that America’s enemies, Britain and France, were fighting each other; “the English armies…altho’ our enemies, are really fighting our battles.” Another Jefferson letter, one of the earliest extant, is the only letter we have ever seen where he is acting as a lawyer.

Abraham Lincoln signed a July 26, 1862 letter on Executive Mansion stationery for an autograph seeker in the Union stronghold of Louisville, Kentucky. The letter is beautifully matted alongside an unusual 1864 Vinton County, Ohio Union Presidential Ticket promoting Lincoln and Johnson.

Albert Einstein penned a 3pp autograph letter signed in German, undated but ca. June 1918, speculating about how his impending divorce from first wife Mileva Maric might affect the interest accrued from prize winnings of a “hypothetical Nobel Prize.” Einstein was clearly hopeful, yet he was only awarded the Nobel Prize in Physics for his work on the Theory of Special Relativity four years later, in 1922. Three other Einstein letters are included within our December sale, including one with excellent scientific content.

Sigmund Freud and his protégé Carl Jung appear in a vintage group photograph taken of members from the Third International Psychoanalytic Congress, ca. 1911, in Weimar, Germany. The two co-founders of modern psychology were still on good terms in 1911, and indeed, they appear nearly shoulder to shoulder in this photo. Their ideological schism occurred the following year, in 1912. This is probably the most important photograph in Psychology.

An insurance cover signed by Apollo XI astronauts Neil Armstrong, Buzz Aldrin, and Michael Collins is the gem of our Space/Aviation category. PSA/DNA graded 9.5 + , the cover comes from the Buzz Aldrin Family Collection.

Collectors will find outstanding items of military memorabilia, ranging from the Revolutionary War and the War of 1812, through the Civil War, both World Wars, Vietnam, and the War in Afghanistan, in our December sale.

A Mathew Brady carte de visite depicting George A. Custer, undated but ca. 1865-1866, is one of the best combinations of bold signature and assertive pose that we have ever seen, and it is PSA/DNA graded Mint 9.

A 120pp store ledger from Camp Scott and Fort Bridger, 1857-1858, paints a colorful picture of frontier life during an era of Indian Wars, Western settlement, Mormonism, and fluid race relations. The ledger mentions future Confederate officers Lewis A. Armstead, killed in action at Gettysburg; Barnard Bee, Jr., slain at 1st Bull Run; and “Rooney” Lee, Robert E. Lee’s son, among many others. The ledger is a fascinating document testifying to the chaotic vibrancy of the American West.

Benjamin Franklin, then a 27-year-old printer who had just published his inaugural edition of “Poor Richard’s Almanack” six months earlier, witnessed a Philadelphia real estate transaction dated May 15, 1733. It is one of the earliest known Franklin signatures ever documented, and is singularly elegant, as “B. Franklin.”

University Archives’ new offices are located at 88 Danbury Rd. (Suite 2A) in Wilton, Conn. For more information about University Archives and the Rare Autographs, Manuscripts & Books auction on Wednesday, November 2, 2022 at 11 am Eastern time, visit www.universityarchives.com. 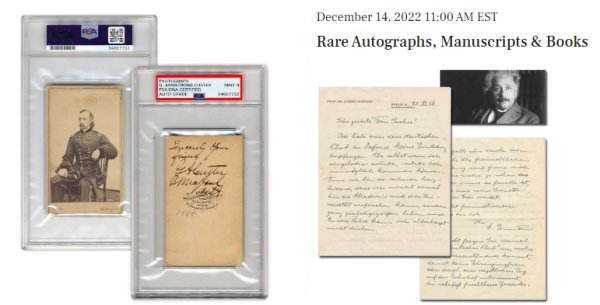