University Archives’  is hosting its first sale of 2023 on February 1st. At over 450 lots, Rare Manuscripts, Books & Sports Memorabilia will offer many exceptional buying and collecting opportunities. Our February sale is especially strong in the U.S. Presidential, Early American, Science, and Sports collecting categories, with 25 lots of the sale relating to professional baseball, basketball, hockey, boxing, soccer, and even horse-racing! In addition, Aviation/Space, Entertainment, Literature, Art, and Music categories are abundantly represented. February’s assortment of historical documents, rare books, photographs, relics, ephemera, exonumia, ceramics, apparel, and sports memorabilia should start the year off with a bang!

All 450+ lots are up for viewing and bidding now (on the University Archives website: www.UniversityArchives.com), plus LiveAuctioneers.com, Invaluable.com and Auctionzip.com. Phone and absentee bids will be taken, but there’s no live gallery bidding.

Letters boldly signed by early American historical giants George Washington, John Hancock and Thomas Paine, plus a 1963 Christmas card signed by both JFK and Jackie, and an archive of material signed by Lincoln and Douglas, will all come up for bid in University Archives’ online auction slated for Wednesday, February 1st , 2023 at 11 am Eastern time.

“Our February auction offers many exceptional buying and collecting opportunities and is especially strong in the U.S. Presidential, Early American, Science and Sports collecting categories, with 25 lots relating to professional baseball, basketball, hockey, boxing, soccer and even horse-racing,” said John Reznikoff, the president and owner of University Archives.

George Washington signed a document as “G. Washington,” authorizing the discharge of Corp. Robert Pappe from a Horse Troop on Dec. 10, 1783. In recognition of his “attention and fidelity” to Washington, Pappe was awarded his military-issued “Horse, Arms and Accoutrements.” Days later, Washington resigned his military commission as Commander-in-Chief of the Continental Army at Annapolis, Md. (est. $20,000-$30,000).

Patriot pamphleteer Thomas Paine wrote an autograph letter signed to a Quaker friend in London on July 12, 1806, confirming reports that he had narrowly missed injury or death on Christmas Eve 1805, when an assailant opened fire at Paine’s home in New Rochelle, New York, possibly motivated by Paine’s public criticism of Christianity or views in general (est. $24,000-$35,000).

A three-page autograph letter signed by John Hancock on March 11, 1777 conveyed the latest news from Philadelphia, where the Continental Congress was to convene, to his wife Dolly in Baltimore. In it, Hancock mentions (but discounts rumors) that, “… General Howe is bent on coming here, [with] another report … that the Merchants at New York are packing their goods and putting them on board ships and that the troops are going away” (est. $20,000-$30,000).

An amazing legal archive of eight documents totaling 34 pages from 1838, signed by two political giants, Abraham Lincoln and Stephen Douglas, and foreshadowing their classic debates for the Illinois Senate seat 20 years later, should bring $18,000-$20,000. The documents, from a single case file, illustrate just one non-litigation role that Lincoln fulfilled during his 25 years of law practice.

A 1963 Hallmark Christmas card was boldly signed by President John F. Kennedy and First Lady Jackie Kennedy just days before his assassination and was never mailed. The words “Blessed Christmas” had been excised at the last minute in a gesture of sensitivity towards JFK’s Jewish friends, and the card was simply engraved “With best wishes for a Happy New Year.” (est. $15,000-$20,000.)

The original seven-page typed agreement in which George and Ira Gershwin, Dubose Heyward and Dorothy Heyward granted the Theatre Guild of New York the rights to produce their classic opera Porgy and Bess for the very first stage performance in 1935, boldly signed by the composer, lyricist and authors, should realize $15,000-$20,000.

Albert Einstein signed a cryptic dedicatory inscription, “Two years after the Fall of the German Goyim. / Kindly granted / Albert Einstein / 1935” on the flyleaf of a first edition copy of his German language book Mein Weltbild, or The World As I See It. His biblical allusion to a “fall” referred to Hitler’s rise in Germany in 1933. The book is expected to finish at $12,000-$14,000.

A one-page typed letter boldly signed by Walt Disney, PSA/DNA slabbed and certified authentic, in which he writes a flattering recommendation letter for a Robert Neuschotz, a former employee in Disney’s Special Effects Department, should fetch $6,000-$7,000. “He was of great assistance in devising and developing devices that have proven to be of value to this organization,” Disney wrote.

A 1996-1997 Michael Jordan home game-worn “Chicago Bulls” jersey, emblazoned with Jordan’s iconic player number “23” in scarlet, is expected to change hands for $6,000-$7,000. The jersey, showing light wear, is graded A5 and comes with a MEARS Letter of Authenticity. That season was one of Jordan’s most outstanding in terms of points, assists, steals and rebounds.

A Wayne Gretzky All-Star exhibition game-worn purple, white, and black sweater, signed and dedicated by the Canadian “Great One” to Major League Baseball relief pitcher Duane Ward on the player number “99” verso, has an estimate of $4,500-$5,500. The sweater is accompanied by a letter of provenance from Ward, who pitched for the Braves and Blue Jays from 1986-1995. 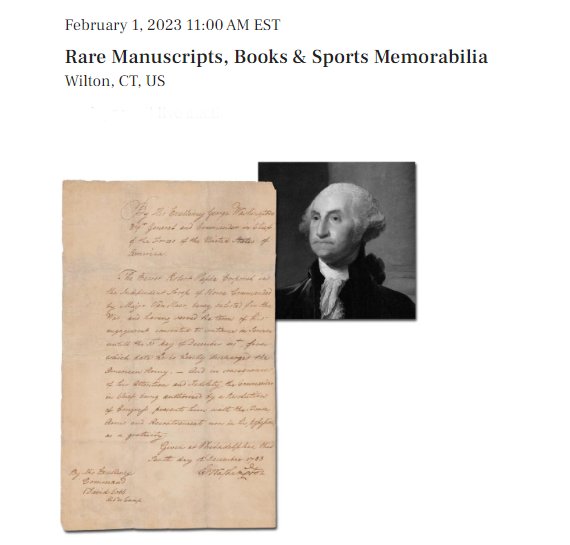