There are many more items to see in our beautifully illustrated online catalog. Wednesday, February 16, 2022 @ 10:30 AM EST.

Our catalog is accessible on our website, Invaluable, AuctionZip, and LiveAuctioneers: 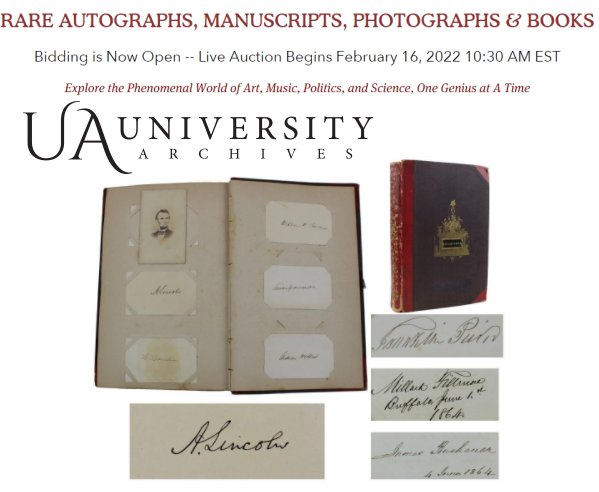 A Revolutionary War-dated manuscript letter twice signed by George Washington and relating to new military draft resolutions passed by the Continental Congress in 1780 provides detailed information about the number of soldiers who had survived the past winter at Morristown, New Jersey, harsher and snowier than even Valley Forge. Continental military commanders Henry “Lighthorse” Lee, Hazen, Webb, and Lamb are explicitly mentioned in this remarkable document. George Washington boldly signed a three-language ship’s passport on July 7, 1794 for a St. Bartholomew-bound schooner commanded by Captain Abijah Potter. Just one year later, Captain Potter was fatally axed during a shipboard slave uprising.

A Civil War-era scrapbook album compiled by an Union Army officer contains 214 bold and mostly high-grade signatures, including those of four presidents (Abraham Lincoln, James Buchanan, Millard Fillmore, and Franklin Pierce); current and future Lincoln cabinet members (Hamlin, Colfax, Seward, Cameron, Welles, Bates); and a myriad of other important American politicians and military leaders. An early legal brief drafted by Abraham Lincoln on May 15, 1854 features his signature as “Lincoln for defendant” in the case of Coventry and Warwickshire Banking Company vs. William Whorrall.

A typed letter in German signed by Einstein addressed to close friend Michele Besso recalled how the two collaborated to formulate the theory of special relativity over 35 years earlier. In the letter, Einstein compared the process of scientific theorizing to God’s creation of the world, both a “pointless luxury” but nevertheless essential to pushing the boundaries of understanding and existence. In a 1p autograph letter signed, Einstein argued that considering ether and its properties would lead to a more accurate understanding of special relativity.

Rare and unusual Sports, Music, and Old West material will also pass the auction block, including a first edition copy of “The Babe Ruth Story,” complete with its original dust jacket and a 1948 letter of provenance, signed by the Sultan of Swat just six months before his cancer death. A signed manuscript copy of John Howard Payne’s wistful song “Home! Sweet Home!”– one of Abraham Lincoln’s favorite melodies–was dedicated to the songwriter’s female friend. Also included is a turn-of-the-century diary and address book signed by Virgil Earp, Wyatt’s older brother, and a fellow participant of the Gunfight at the O.K. Corral. The extreme scarcity of Virgil Earp autographs, combined with the item’s unbroken chain of custody from Virgil’s third wife Alvira, make this an Old West treasure.

These are just a few of many spectacular autographs, manuscripts, photographs, rare books, maps, relics, and historical collectibles that will be offered on February 16, 2022. We hope you can join us!

Visit The Companies Featured on Auction Report at The National July 27 – 31, 2022