There are many more items to see in our beautifully illustrated online catalog. We hope you can join us on January 6, 2022. 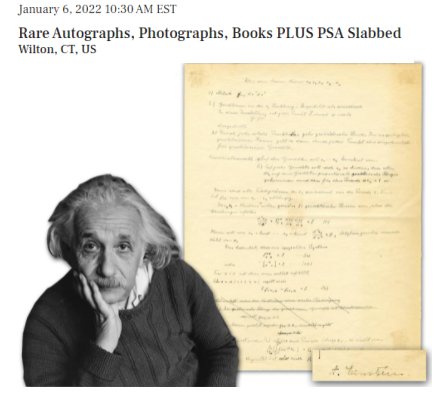 The Rare Autographs, Photographs, Books Plus PSA Slabbed auction has over 530 lots in a wide array of collecting categories. A 201-lot subset will feature important items that are PSA/DNA slabbed and graded.

A manuscript handwritten in German by Albert Einstein, signed, with several lines of mathematical equations, a check made out to a charter airline by John F. Kennedy during his 1960 presidential campaign, and a handwritten document signed by the legendary lawman Bat Masterson when he was just 25 years old will all be part of University Archives’ next online-only auction scheduled for Thursday, January 6th, beginning promptly at 10:30 am Eastern time.

The Rare Autographs, Photographs, Books Plus PSA Slabbed auction features historical material from multiple collecting categories. A 201-lot subset will exclusively feature pieces that are PSA/DNA slabbed and graded. “As many in the industry well know, items in this format, once solely the territory of sports cards, have taken the collectibles field to the next level, with frequent realizations into the multi-million-dollar range,” said John Reznikoff, president and owner of University Archives.

Mr. Reznikoff added, “While old-school collectors tend to be more tactile, the new breeds favor a new way to secure their investments, that is, by having items third party-graded, authenticated, and permanently protected. Even Wall Street is on board, with Steve Cohen and others’ billion-dollar purchase of Collectors Universe, the parent company of PSA.  This being our biggest sale yet, we’re confident there will be great opportunities for dealers and collectors of all categories.”

The catalog, with all 530+ lots, is up for viewing and bidding now, on the University Archives website (www.UniversityArchives.com) as well as LiveAuctioneers.com, Invaluable.com and Auctionzip.com. Phone and absentee bids will also be accepted. It’s the ninth auction that will be conducted from University Archives’ modern, new 6,000-square-foot facilities in Wilton, Conn.

Taking center stage will be the Einstein autograph manuscript, handwritten in German circa 1938 and signed at its conclusion as “A. Einstein.” It carries a pre-sale estimate of $40,000-$50,000. The manuscript constitutes part of Einstein’s attempts at developing a unified theory of electromagnetism, gravitation and quantum mechanics; he later co-authored a paper exploring this topic titled On a Generalization of Kaluza’s Theory of Electricity (1938).

The check that JFK made out to a Massachusetts charter airline company for a trip to the Kennedy Compound in Hyannisport, Mass., during his 1960 presidential campaign carries an estimate of $15,000-$16,000. The check is boldly signed and signature PSA/DNA slabbed and graded NM-MT 8. Also up for bid is a first edition copy of The President’s Commission on the Assassination of President Kennedy, signed by all seven commission members and general counsel J. Lee Rankin.

An autograph document signed by Bartholomew “Bat” Masterson, with over 30 words, numbers and figures written in his hand, is PSA/DNA slabbed and graded Mint 9. When he signed this 6.375-inch by 4.5-inch receipt, the 25-year-old Masterson was then serving as Sheriff of Ford County, Kansas and was just months away from being defeated in the Royal Gorge War, fought between two rival Western railroad companies. The document should finish at $27,500-$30,000.

A letter handwritten by Abraham Lincoln, dated March 25, 1852, is boldly signed and addressed to Hon. William Thomas, regarding real estate business in Shawneetown, Ill. The 7.5-inch by 4 inch letter is PSA/DNA slabbed and graded Mint 9 (estimate: $12,000-$15,000). Also, a one-page document from around 1762 signed by George Washington, regarding a settlement of accounts with Sheriff William Payne of Fairfax County, Va., should hit $12,000-$14,000. The two had a contentious history: Payne had struck Washington with a stick during a disagreement seven years earlier.

Another Washington-related lot – this one a Rev War free frank addressed in his hand to Gen. Henry Knox (1750-1806), Commandant of West Point, signed as “Go: Washington”, PSA/DNA slabbed and graded NM 7 – has an estimate of $8,000-$9,000. Knox was a close friend of Washington, who appointed him the country’s first Secretary of War.

One page of a bifolium dated Dec. 12, 1792, boldly signed by Alexander Hamilton as Treasury Secretary and addressed to Sharp Delany, Esq., Collector of Customs in Philadelphia, instructing him ironically to order pistols, should finish at $9,000-$10,000. Also, a one-page note signed by Thomas Jefferson as President, dated Sept. 13, 1808, written from his home in Monticello, addressed to Edgar Patterson, a government contractor, regarding a letter from Patterson that was forwarded to James Madison, has a pre-sale estimate of $8,000-$9,000.

A two-page autograph manuscript by Richard Feynman, pertaining to the Challenger disaster of 1986, is expected to make $12,000-$14,000. Feynman was appointed to the Rogers Commission, tasked by then-Pres. Ronald Reagan with investigating the causes of the space shuttle’s mid-air explosion. Also, an archive of handwritten documents and printed journals relating to John Peter Zenger, the German printer accused of seditious libel in 1734, including material signed by key trial participants, including New York Gov. William Cosby, should command $10,000-$12,000.

A Dr. Martin Luther King, Jr. signed record cover, containing an original recording of his “The American Dream” speech delivered at Syracuse University in July 1961, the precursor of King’s iconic “I Have a Dream” speech, signed “Best Wishes / Martin Luther King, Jr.”, should rise to $6,000-$7,000. Also, a wire transfer from Argentina signed and dated Dec. 13, 1952 by Oskar Schindler, in Spanish for the sum of 2600 Argentinean pesos, to be sent to Gertrude Tutsuth, has an estimate of $10,000-$12,000. Schindler famously saved 1,200 Jews during World War II.