There are many more items to see in our beautifully illustrated online catalog. We hope you can join us on November 10, 2021. 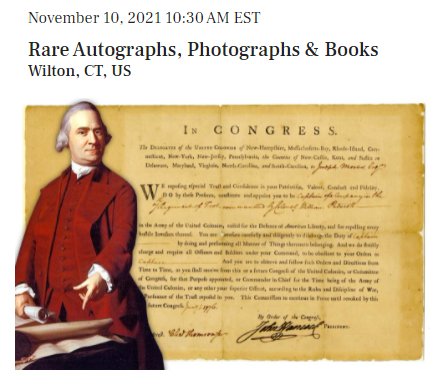 PRESIDENTIAL
Jefferson, Lincoln, Kennedy, and Roosevelt are just a few of the presidents featured in our November sale. A 1p autograph letter signed by Thomas Jefferson in superb condition touting America’s superiority over Europe is sure to interest presidential collectors. John F. Kennedy signed the appointment of “Robert S. McNamara of Michigan” to serve as the nation’s youngest Secretary of Defense on January 21, 1961. An autograph album contains 180 signatures of Lincoln administration officials and members of the 37th U.S. Congress, including President Abraham Lincoln and 6 current and future Lincoln cabinet members (Seward, Chase, Welles, Stanton, Smith, and Fessenden). President Zachary Taylor introduces a Louisiana surveyor to Secretary of the Interior Thomas Ewing in an exceedingly rare 1p autograph letter signed.

REVOLUTIONARY WAR
One of the highlights of this category is a military commission dated January 1, 1776 boldly signed by John Hancock in his role as President of the Continental Congress. The document relates to William Prescott’s 7th Regiment of Foot, the same company which was counseled “not to fire until you see the whites of the their eyes” at the Battle of Bunker Hill six months earlier. Another remarkable relic is a Revolutionary War powder horn belonging to 18-year-old minuteman Oliver Buttrick and used at the Battle of Concord on April 19, 1775. The horn is accompanied by over 50 pages of provenance information available upon request.