In business for over 40 years, University Archives has paid out over $200 million for items just like yours! Our monthly auctions attract nearly 6,000 registered online bidders (and counting) from over 60 countries around the world. We buy or take on consignment autographs, rare books, historical documents, and relics.

A Few of our Highlights
In early 2020, we sold two items related to Abraham Lincoln which fetched a combined quarter of a million dollars. A PSA/DNA encapsulated and graded Gem Mint 10 Lincoln signed carte de visite realized $75,000, while a book formative to Lincoln’s views on slavery–inscribed and signed by him–changed hands a few lots later for $175,000. And we do much more than just presidential: in October 2018, we sold Bob Dylan’s handwritten and signed lyrics of “The Times They Are A-Changin'” for $132,000, while an Albert Einstein typed letter signed discussing gravitation and time brought just shy of $50,000 in August 2019. 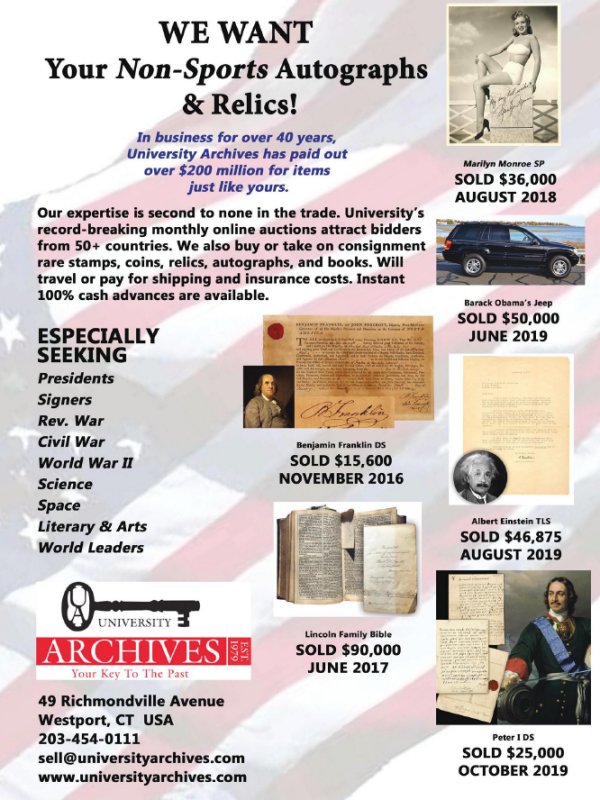 Let us provide YOU with some economic stimulus!

Do you have items to consign? Call us today at 203-454-0111 or e-mail John Reznikoff at john@universityarchives.com.