University Archives offers in the current January 23, 2019 auction Lot 127: John Paul Jones The “Father of the American Navy” Writes to Jefferson On Securing Prize Money From France Due to America for Ships Captured by Jones during the Revolution. The letter Has Jefferson’s Handwritten Endorsement. Bid on the item here.

John Paul Jones The “Father of the American Navy” Writes to Jefferson On Securing Prize Money From France Due to America for ships captured by Jones during the Revolution. The letter has Jefferson’s handwritten endorsement.

Single page Letter on laid paper, written to Thomas Jefferson as Minister Plenipotentiary of the United States for France, and signed by John Paul Jones. This letter is registered, and appears on the Founders.gov website, 7.25″ x 9″. Penned in a secretarial hand, dated “Paris sept 3rd, 1786”, and signed by John Paul Jones as “Paul Jones”. Inclusive of an annotation in the hand of Thomas Jefferson on the top right edge of the verso of the letter, “Jones J.P.” Light toning, fine condition. Placed in a removable Mylar case to preserve the outstanding beauty of this letter. Accompanied by a lovely detailed Carl Gottlieb Guttenberg engraving of John Paul Jones.

Jones the first well-known naval commander in the American Revolutionary War, made many friends and enemies, his actions in British waters during the Revolution earned him an international reputation which persists to this day. As such, he is sometimes referred to as the “Father of the American Navy”, and his fighting spirit was immortalized in his numerous quotes. This letter with superb content has Jones discussing with Jefferson international business and “prize money,”. The two were continuing their efforts to recover from the French Government significant prize money due to America for ships captured by Jones during the late war. The French authorities had attempted to deflect the claim by asserting that the vessels had been largely manned by French citizens, which Jones had vigorously disputed, asserting that his ship, the Alliance was manned exclusively by American sailors. It was also during this period Jones and Jefferson were in contact concerning slow but important negotiations regarding piracy in the Mediterranean, Americans held captive by Algiers, American debts to European bankers, and piracy among the marauding Barbary pirates. 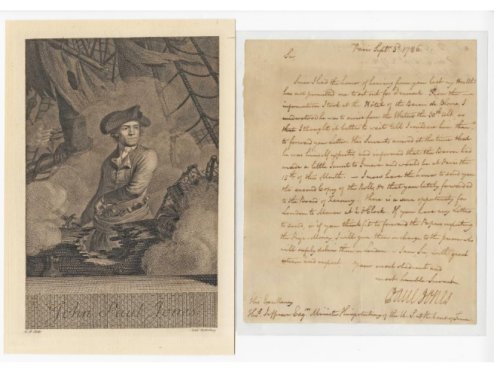 The American Revolution left the national economy a mess, debt-ridden with disrupted trade. Halfway across the world, bands of state-sponsored pirates moved to take advantage of the new United States. These were the Barbary pirates, four countries (Morocco, Algiers, Tunis, and Tripoli) whose kings ruled in the name of Islam. These kings routinely extorted tribute from Western countries, or declared war on them as an excuse for raiding their merchant ships in the Atlantic and Mediterranean. When England stopped paying for Americans’ protection, the pirates began robbing and kidnapping Americans. this country idly stood by in the 1780’s while its people were enslaved and dying of plague in Algiers, the most hostile state. There was no way to respond; there was no money to pay tribute, to ransom the captives, or to fight. The American people couldn’t even agree on why they were under attack. Debates raged, ‘The Barbary Wars were primarily about trade, not theology, rather than being holy wars, they were an extension of America’s War of Independence’. Jefferson would perhaps have been just as eager to send a squadron to put down any Christian piracy that was restraining commerce. But one cannot get around what Jefferson heard when he went with John Adams to wait upon Tripoli’s ambassador to London in March 1785, just a year before this letter from Jones. When they inquired by what right the Barbary states preyed upon American shipping, enslaving both crews and passengers, America’s two foremost envoys were informed that “it was written in the Koran, that all Nations who should not have acknowledged their authority were sinners, that it was their right and duty to make war upon whoever they could find and to make Slaves of all they could take as prisoners, and that every Mussulman who should be slain in battle was sure to go to Paradise.”

John Paul Jones, wanted not just a war but “a crusade.” At one point, Jefferson hoped that Jones, might assume command of a squadron that would strike fear into the Barbary pirates. While ambassador in Paris, Jefferson had secured Jones a commission with Empress Catherine of Russia, who used him in the Black Sea to harry the Ottomans, the ultimate authority over Barbary. But Jones died before realizing his dream of going to the source and attacking Constantinople. The task of ordering war ultimately fell to Jefferson.

The letter from Jones to Jefferson is shown transcribed below:

“Sir, Since I had the honor of hearing from you last my Health has not permitted me to set out for Denmark. From the information I took at the Hotel of the Baron de Blome I understood he was to arrive from the Waters the 30th ult. so that I thought it better to wait till I could see him than to forward your Letter. His Servants arrived at the time that he was himself expected, and informed that the Baron had made a little jaunt to Geneva and would be at Paris the 15th this Month. I now have the honor to send you the second copy of the rolls, &c., that you lately forwarded to the Board of Treasury. There is a sure opportunity for London tomorrow at 2 o’clock. If you have any Letters to send, or if you think fit to forward the papers respecting the Prize-Money. I will give them in charge to the person who will safely deliver them in London. I am, Sir, with great esteem and respect,

your most obedient and

Note: Letters of this great early American Naval Figure Are Extremely Scarce, in part due to his early death at the age of 45. One of the rare few to have ever been previously offered at auction, sold at Christies in 2004 in excess of $65,000. In the last 50 years at public auction only 4 such prized letters of Jones to Jefferson have been offered, and only one was 1 page exhibitable. It is doubtful that any of these letters could be in as pristine condition as our letter .Other than the one mentioned the other three sold for $34,375 in 2014, $32,500 in 2010 and $36,000 in 1999 !This piece was removed from a frame with the “E.F. Bonaventure Art Gallerie, 601 Fifth Avenue New York” seal intact and was kept with the item for provenance. E.F. Bonaventure was a beloved art and book dealer whose friends and customers included J.P. Morgan. Bonaventure died in 1918, indicating that this John Paul Jones was probably highly prized 100 years ago. Accompanied by a Carl Gottlieb Guttenberg engraving of one of the earliest known portraits of John Paul Jones.