Along with the envelope in which they arrived, a pair of 1967 Super Bowl I Full Tickets are estimated to sell for more than $30,000 in an online auction this weekend. Heritage Auctions is offering the two unused tickets for what is arguably the most important football game ever played, during its Saturday Platinum Night Sports Collectibles Auction on HA.com.

The tickets come from the personal collection of Homer Hall, who worked in Washington, D.C., for Oregon Congressman Al Ullman, a role Hall’s daughter suspects was the reason her father received the tickets directly from the office of what at the time was called the “AFL-NFL World Championship Game.” When the NFL’s Green Bay Packers and the AFL’s Kansas City Chiefs squared off Jan. 15, 1967, in what was viewed by many as little more than a grudge match between the two leagues, nobody could have realized the monstrous event the sport’s championship game would become. 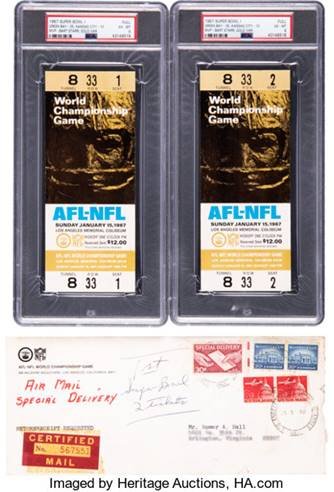 The cost of the tickets, which are consigned by Hall’s daughter, was relatively miniscule – the face value printed on the tickets was just $12, compared to the thousands fans have paid to attend the game in recent years. Mailed from Los Angeles to Washington just six days before the game, Hall either was unable or unwilling to make the cross-country trek to the game, and the tickets disappeared for decades, only to emerge now as elite collectibles.

“It’s really exciting when you can picture the exact story behind a certain piece,” Heritage Auctions Sports Consignment Director Chris Nerat said. “This is one of those rare instances in which we can picture Mr. Hall receiving the envelope with the tickets in the mail, and then having to make the decision whether or not to go to what turned out to be the most significant game in football history.

“He chose not to attend, but thankfully for collectors, that decision not to go has resulted in an opportunity for someone to own a true rarity, because these tickets are essentially a museum piece.”

From that first game, played in front of a partly-empty Los Angeles Memorial Coliseum, the game has evolved into the biggest sporting event of the year, replete with two weeks of pre-game media hype and a halftime show with Grammy Award-winning musical acts. Sponsors now line up to pay millions of dollars for advertisements that will be seen by millions of viewers around the world.

“These tickets are comparable to buried treasure,” Nerat said. “They have been tucked away for decades.”