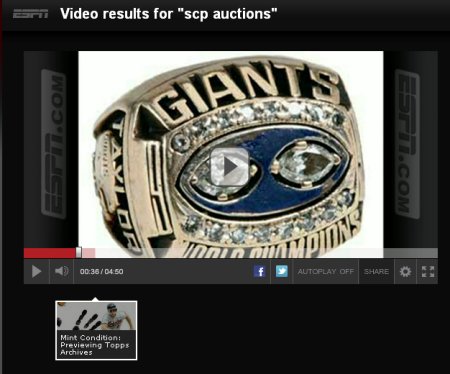 “We are honored to, once again, be a part of history,” said David Kohler, president of SCP Auctions. “This proves again that Babe Ruth is “king” in the sports memorabilia world. We are proud to offer these and other high-quality items for all collectors.”

The Ruth jersey had been exhibited for years at The Babe Ruth Birthplace Museum in Baltimore, Md. According to baseball-reference.com, the bid for this jersey is more than Ruth’s 22-year career earnings of $911,000.

Few Babe Ruth collectibles in the category of “game worn” can match the appeal of Wells’ 1930s Ruth cap. Only a handful of Ruth New York Yankees game-worn caps have survived the three-quarters of a century that has passed since the Babe last played in the Bronx, ranking them on the rarity scale above all team-issued garments, including jerseys. The cap’s seller, the irreverent Wells, added to the lore of the cap when he famously wore it on the mound during a game on June 28, 1997 in homage to his idol, Ruth.

Other highlights of the auction include:

About SCP Auctions
SCP Auctions, Inc. has been a leader in brokering and auctions of important sports memorabilia and cards since 1979. The Southern California based firm conducts online auctions throughout the year, highlighted by their Premier Auctions in the spring and fall. SCP Auctions has handled some of the most significant individual items and prominent collections in their field, such as the record-setting sale of the famed T206 Honus Wagner baseball card ($2.8 million) and Babe Ruth’s bat used to hit the first home run in Yankee Stadium ($1.265 million). Other items of significance handled by SCP are the original 1919 Contract of Sale of Babe Ruth from the Red Sox to the Yankees ($996,000), and the estate collections of Hall of Famers such as Honus Wagner, Tony Lazzeri, Bob Cousy, Wilt Chamberlain, Casey Stengel, Pee Wee Reese, and Ernie Banks. Interested bidders can call (800) 350-2273 or visit SCP Auctions online at www.SCPAuctions.com for more information on how to participate.