Adrian Constantine “Cap” Anson remains the most historic of the 3,000 Hit Club Hall of Famers – the first in baseball history to reach the 3,000 Hit plateau.Â Playing his entire career before the year 1900, AC was known as “Cap” for Captain serving 19 of his 27 major league seasons as player-manager recognized quickly for his onfield intelligence and ability to lead a ballclub.Â He finished his career with 3,418 hits, two batting titles, and a career lifetime average of .333.Â He was a controversial figure who allegedly led his team off the field instead of playing a team with a black ballplayer.Â But his teams always appreciated him for the leader that he was.Â He became owner of the Chicago White Stockings (Cubs) in 1888 (the season’s game use of this lot’s bat) and after leaving the team in 1897 the team went with the name the “Orphans” in homage to his exit. 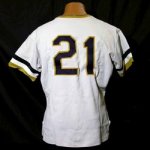 This lot contains one of only three game used bats known to exist graded and certified authentic by MEARS as game used by Cap Anson enshrined in Cooperstown in 1939.Â And as of 2/2/05 it was the first 19th Century HOF game bat ever authenticated.Â Made of high quality hickory, it measures 46.6 oz and 34.25″ matching known specs of the few other Anson exemplars.Â The barrel is completely blank as was custom of the 19th Century game bats but the specs are consistent with other 19th Century game bats, styles, and photos known to exist from the same time period.Â Known manufacturers such as H&B and Spalding had yet to begin branding bats with their company names – an unheard of practice during the era.Â Bats were typically made for ballplayers by local woodworkers and typically void of any identification.Â Branding of bats did not even begin until the mid to late 1890s.Â

Overall it exhibits significant game use evidence consistent throughout with professional grain wood and an uncracked handle which remains slightly bowed due to its age.Â The rough finishing evidenced by the top of the barrel and bottom of the knob indicates the game bat was hand made and not factory produced also customary of the time period.Â Its lack of visible marks in respect to ball marks and stitch marks, etc is mainly due to the hardness and quality of hard grain hickory that was used to manufacture game bats of the era.Â 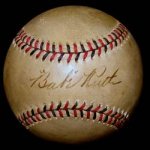 Anson game used representation.Â First, a 4″x4″ vintage white piece of paper exists on its barrel/hitting surface the inscriptions of which remain undecipherable.Â Parts of the paper have been worn away exposing areas of discoloration consistent of those from the time period of 1907 or earlier with letters of documentation supporting this fact serving as testament to the bat’s era.Â Secondly, there is also vintage black fountain pen writing on the barrel that has been deemed vintage and authentic from the time period that states “This bat was used in the campaign of the 1888 Chicago B.C. (Baseball Club) By Our Beloved Adrian C. Cap Anson”.Â A few words then follow that cannot be deciphered followed then by “League Batsman”.Â

Lastly, the original article cut from a March 1907 Sporting Life article details the game bat’s origin dating the bat in Anson’s personal possesion with all authenticators involved supporting the fact that the game bat in this lot is indeed the bat mentioned in the article.Â The article recounts the story of how Pittsburgh catcher Harry Peitz aka Henry aka Heinie Peitz, who enjoyed a 16 year major league career, was at the time of his meeting with Anson a member of the Pirates circa 1906.Â Peitz actually obtained this game bat while visiting Anson at his home.Â The Hall of Fame 3,000 Hit Club member encouraged Peitz to visit his home by stating “come out to my house this evening and I will show you something to make your eyes water”.Â Who among us could possibly decline.

Anson took him down to his cellar and Peitz was allowed to see hundreds of vintage hickory game used bats hanging in racks.Â Anson encouraged Peitz to take his pick as a momento and Heinie wisely chose the game used specimen presented in this lot.Â He very temporarily loaned the Anson relic to outfielder Otis Clymer of the 1906-07 Pirates in order to make an exact replica made with Clymer stating “That’s a great piece of wood”!

Overall, with the historical significance and accompanying provenance and documentation to the bat’s exact origin included in this lot for the high bidder to own and Anson’s place in the history of baseball and the prestigious 3,000 Hit Club, the authenticators have given the rare 19th Century game bat relic a rare perfect grade of 10* noting that the “star” designation is granted in instances of significant historical importance.Â Simply put, this ultra rare gamer is one of only three documented Ansons known to exist and stands as the most important item of baseball memorabilia that Vintage Authentics has ever presented for auction with its actual value truly immeasurable.Â Â Â Â

For futher bididing information or to bid on any of the items in Vintage Authentics current auction click here.