The Memory Lane Summer Rarities Auction had plenty of high-grade vintage sports cards and bidders weren’t shy about spending what it took to own some of them. Numerous records fell when the dust settled in the early hours of Sunday morning, some of which were multiple times the previous marks. In all, the auction tallied over $8.9 million in sales.

Other post-War records for their grades included:

Memorabilia didn’t escape bidders either. A copy of the first World Series program in 1903 went for $77,225, and a 1918 World Series Fenway Park program fetched a record-setting $28,082. Additionally, a full ticket to Don Larsen’s 1956 World Series perfect game, signed by the late pitcher and encapsulated by PSA reached a staggering $45,743, roughly three-times the previous high-mark.

Complete results can be found on Memory Lane’s Website memorylaneinc.com. Achieve RECORD RESULTS by Consigning NOW to our Winter Auction! Visit our Website or CALL 877.606.5263 Today! 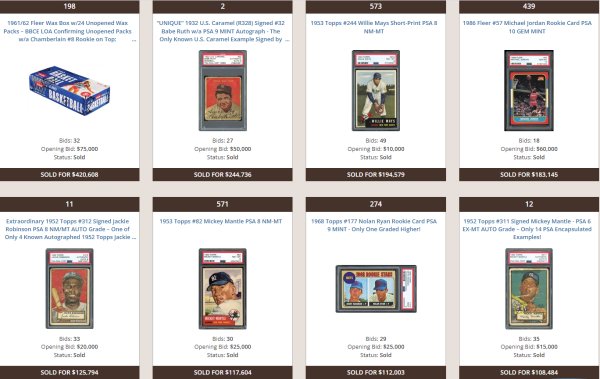