Make sure to visit Collect Auctions next week at the National Sports Collectors Convention in Atlantic City. Many of the key items from our current auction will be on display at the show (August 3-7). Collect Auctions will be set up in Booth 113 to accept consignments for our winter auction, distribute catalogs, answer questions and display items from our auction ending August 11.

The current auction is viewable and available for bidding on our web site at www.collectauctions.com. There 1,250 lots of vintage sports cards and sets; more than 10,000 signed sports cards; a great mix of signed baseballs, photos, jerseys, bats and music items; the largest array of early Michael Jordan Star Co. and Fleer cards ever auctioned; an unparalleled selection of vending, cello and wax boxes; and much more. Bidding ends Thursday, August 11 at 9:00 p.m. CST (10:00 EST). 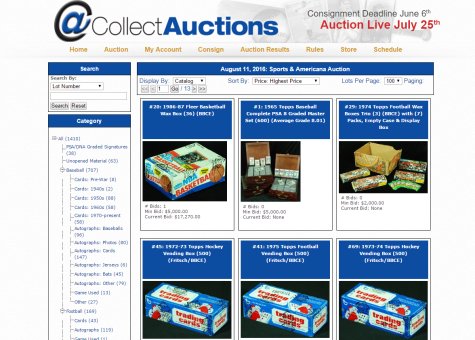