SCP Auctions is proud to be exhibiting a significant amount of outstanding sports memorabilia items and cards at its easy-to-find booth at this year’s National Sports Collectors Convention at the Donald E. Stephens Convention Center in Rosemont, Illinois (July 29 to August 2).

Buyers, collectors, sports fans and consignors are encouraged to swing by and peruse our assortment of top-notch pieces and ask questions to our knowledgeable staff. We will be located just inside the main entrance, to the right. SCP Auctions will be buying important sports memorabilia items on site and providing generous cash advances to consignors who bring noteworthy pieces.

Many high-end items featured in our fast-approaching 2015 Mid-Summer Classic (August 5 to 22) will be on display including: 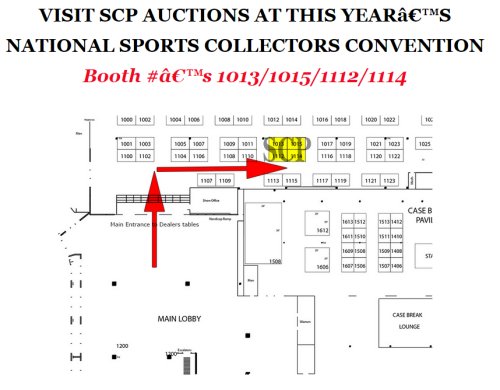