A low-grade copy of the hobby’s most recognizable baseball card sold for $444,000 early Sunday as Robert Edward Auctions wrapped up its Spring 2016 catalog auction.   The auction tallied $7.95 million as 706 different buyers walked away with one item or more. The auction featured 136 items that hammered down at more than $10,000. Five items cracked six figures.

There was intense competition for classic cards in all grades, as Ruth, Mantle, Cobb, and key rookies continued to reach new heights.

“The results of this auction illustrate the great strength of the market as well as the appreciation, and increasing demand, for quality items in all areas of the hobby,” said REA President Brian Dwyer.

A trio of SGC-graded cards took the top three positions in the list of realized prices in the auction. 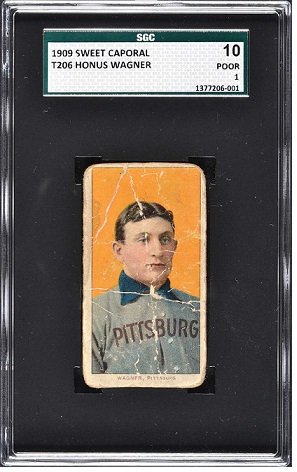 Over the last year, Sportscard Guaranty (SGC) graded card values have risen dramatically. That upward trend continued in the Spring 2016 Robert Edward Auction (REA) that closed April 30th. “This auction demonstrated collectors’ tremendous confidence in SGC as the top three highest-grossing lots in our auction were all SGC graded and transacted at record-setting prices, including $444,000 for a T206 Honus Wagner in Poor condition,” said REA President Brian Dwyer.

The focal point of the auction was Lot #1, the iconic 1909 T206 Honus Wagner featuring a Sweet Caporal back. As mentioned above, the card was graded an SGC 10 (Poor), and sold for the highest price ever realized for a Poor Wagner—over $40,000 more than the last auctioned copy. Despite the Poor condition, the card presents quite well with its bold image and vibrant color beautifully contrasted against the black insert of the SGC holder. The Honus Wagner T206 has been and always will be regarded as the holy grail of the hobby.

The Wagner may have been the focal point for most, but to Reggie Jackson collectors, the 1977 Topps Proof was the key to the auction. Lot #1197 featured a 1977 Topps Reggie Jackson Orioles Proof, the toughest Reggie Jackson card, and one of the rarest Post War cards. It is the ever insurmountable hole in almost every “Mr. October” collection. Encapsulated in an SGC holder, the card dwarfed all previous sales reaching an astounding $60,000.

No auction would be complete without a 1952 Topps Mickey Mantle, which is possibly the hottest card on the market today. The Spring 2016 REA auction featured a beautiful example that SGC graded an 86 (NM+). This centered, crisp Mantle attracted 26 bids, realizing a final price of $180,000—a very impressive number for the condition. This was a huge price increase compared with the last recorded SGC 86 (NM+) sale of $65,725 in November 2014.

Another noteworthy SGC card that sold in the auction was a 1909 Ramly T204 Walter Johnson SGC 70 (EX+), one of “The Big Train’s” most elusive cards. With only a handful ever grading higher, this example brought a record $48,000. This is yet another SGC card that has increased in value dramatically over the last year—an SGC 80 (EX/NM) example sold for $21,999 in April 2015.

Shattering all previous records for the grade, a 1909 Piedmont Ty Cobb Green Portrait SGC 70 (EX+) appeared in Lot #557. The Green Portrait is considered the most desirable of the four Cobb poses featured in the T206 set. The last recorded sale by VintageCardPrices.com for a T206 Green Background Cobb in an SGC 70 (EX+) was $5,875. The final price realized for this SGC graded Cobb was a mind-blowing $39,000, representing a value increase of over 600%.

One thing is clear: the demand for SGC graded cards is on the rise and values are soaring to new heights. Log on tohttp://robertedwardauctions.com/ to view more SGC graded cards that sold for record prices.