The Walter Alston Estate Collection Headlines SCP Auctions Mid-Summer Classic. Don’t miss out of having your items feature in this auction. Deadline to consign closes on June 17! Please email info@scpauctions.com or call 949-831-3700 to consign today! Nearly 100 outstanding lots will go up for bid on Wed., August 3, 2016.

A single at-bat, which resulted in a strikeout, comprised the playing career of the late Walter Alston. But four World Series titles, seven National League pennants, and 2,040 regular-season triumphs later – all realized in a managerial capacity at the helm of the Brooklyn and Los Angeles Dodgers – cobbled his path to Cooperstown.

A native Ohioan, Alston earned the nickname “Smokey” in high school because of his blazing fastball. He attended Miami of Ohio University where he lettered in baseball and basketball before signing with the St. Louis Cardinals in 1935. In 1940, when it became apparent he wasn’t in the Cardinals’ future plans as a player, Alston was given the opportunity to play and manage in their farm system. He was released by St. Louis in 1944, but was spotted by the keen eye of former Cardinals General Manager and then-Brooklyn President Branch Rickey who signed him to play and manage in the Dodgers minor league system. Following the ‘53 season, Brooklyn Skipper Charlie Dressen insisted on a multi-year contract to continue as Dodgers’ skipper. Brooklyn Owner Walter O’Malley balked at the demand and to everyone’s surprise chose the little known Alston to pilot the club.

He led the Dodgers to a second place finish in 1954, then won Brooklyn’s first World Series title in 1955, defeating the Yankees in seven games. Always displaying a calm, professional demeanor, the unflappable homespun Ohio farmer managed the Brooklyn/Los Angeles Dodgers for the next 23 seasons. His teams won 90 or more games in 10 different seasons. On July 17, 1976, Alston became only the sixth manager in MLB history to win 2,000 games. Just before the end of that season he retired as Dodgers’ skipper with 2,040 wins. He was named N.L. Manager of the Year six times, and led N.L. All-Star teams to seven victories. He was elected into the Baseball Hall of Fame in 1983.

SCP Auctions is honored to present the Walter Alston Estate Collection as part of its 2016 Mid-Summer Classic Auction. A sampling of highlights is presented below. 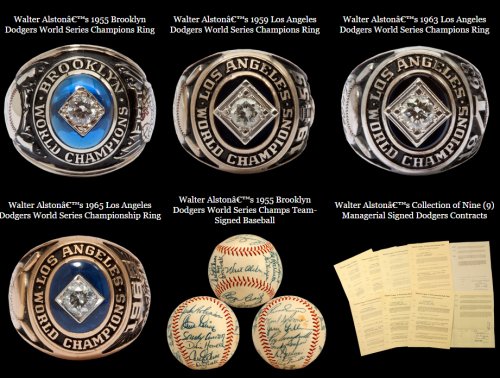 Consignment Deadline is Friday, June 17th!
The opportunity to consign your valuable sports memorabilia and graded cards in SCP Auctions’ 2016 Mid-Summer Classic event closes this week, on Friday, June 17th! With an outstanding lineup of prized lots already entered into the auction, rest assured, you’ll be participating in one of the Sports auction events of the year! Call 800-350-2273 or email info@scpauctions.com today.