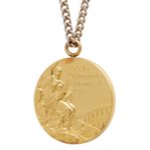 (By Robbi Pickeral | ESPN.com)  You, too, can win an Olympic gold medial. But rather than run, jump, swim, flip or shoot, you simply have to bid. Former North Carolina star Walter Davis, a member of the 1976 USA basketball team that won gold in Montreal, has his medal up for bid as part Grey Flannel Auctions’ seventh annual Basketball Hall of Fame induction auction. The reserve amount began $10,000, and as of Thursday morning, the highest bid had risen to $12,000.  The auction lot includes a letter of authenticity from Davis. Read full story on ESPN.com.