Walter Hagen was unquestionably golf’s foremost celebrity playboy of his era, and the 1926 match play battle at the PGA Championship took place when he was firmly in his prime. Winning for the third year in row, this 1926 Walter Hagen PGA Championship Gold Medal, (est. $80,000+), was presented to Hagen after he defeated two fellow future Hall of Famers – Johnny Farrell and Leo Diegel – in the semifinals and finals, respectively, clinching the championship, four and three, to secure the third link in an unbroken chain of four victories in the tournament between 1924 and 1927. It would prove to be the eighth of 11 career major championships.

The ninth playing of the PGA Championship took place at Long Island’s Salisbury Golf Club, just a few miles from the towns that served as the fictional inspiration for West Egg and East Egg in F. Scott Fitzgerald’s masterpiece, The Great Gatsby, published just a year earlier. It was a fitting battleground for 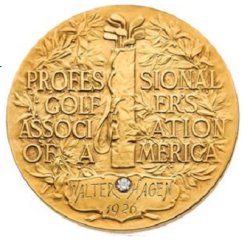 the ultimate victor, a man nearly as emblematic of the debauchery of the Roaring Twenties as Babe Ruth.

Obverse reports “Professional Golfers Association of America” with Walter Hagen’s name and “1926” engraved below beside an inset real diamond in 21K gold. The back features a woodland scene with two victory figures and a “Henning Ryden” maker’s mark.

Additional auction highlights include but are not limited to: