Wayne Gretzky has always been The Great One. But early Friday morning he became The Greatest One when the Canadian version of his Edmonton Oilers’ rookie card became the first hockey card ever to break the million-dollar mark.  One of only two known 1979 O-Pee-Chee Gretzkys graded Gem Mint 10 by Professional Sports Authenticator sold for $1.29 million during the first session of Heritage Auctions’ four-day Fall Sports Collectibles Catalog event. That’s almost three times the previous record of $465,000 set four years ago, when there was but one known PSA Gem Mint 10 known to exist. The Gretzky O-Pee-Chee that sold Friday belonged to entrepreneur Patrick Bet-David.

A gem-mint-condition American version of Gretzky’s NHL debut card, which set its own record Friday morning, wasn’t too far behind. A 1979 Topps Gretzky graded PSA Gem Mint 10 – like its Canadian counterpart, one of only two to receive the perfect score – realized $720,000. Its previous sale record was $201,000. 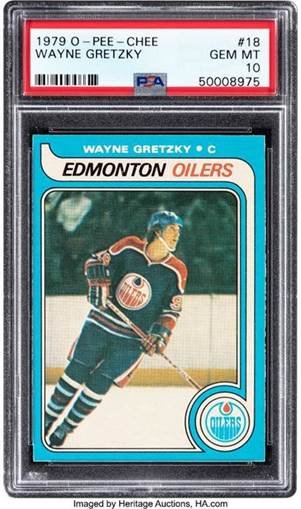 Gretzky was far from the only star to shine in the sale’s first session. Numerous cards throughout the first session exceeded expectations, from those featuring baseball’s earliest stars to those bearing the monikers of far more modern heroes.

Chief among them was the green-shaded 1997 Michael Jordan Metal Universe Precious Metal Gems, of which there were just 10 made. Its pre-auction estimate was $500,000. But by session’s end that Jordan realized $915,000. That’s more than twice the price paid in August when Heritage sold the only known Jordan 1986 Fleer rookie card graded Pristine 10 for $420,000, a world-record price for Jordan’s debut.

“Wayne Gretzky and Michael Jordan are the best of the best in their respective sports,” says Chris Ivy, Heritage’s Director of Sports Auctions. “And the prices Heritage has achieved for some of their most sought-after cards are emblematic of their standing in the sports collectibles market.

“The simple fact is, when collectors see the opportunity to add an unparalleled piece to their collections, you can throw estimates out the window. That’s clear from the pre-auction estimates that were shattered during this session.”

A 1916 M101-4 Sporting News Babe Ruth rookie card certainly called its shot during the first session. This stunner was among other century-old Sporting News cards discovered in a plastic baggie by a Miami artist who wishes to remain anonymous. She had no idea of their value, if any — only to discover that the entire collection was estimated at well more than $250,000.

The 1933 Delong Lou Gehrig No. 7, PSA NM-MT+ 8.5, is the only known example to grade that high, and its pre-sale estimate was $80,000. But by the time extended bidding ended early Friday morning, the gorgeous card – featuring a black-and-white photo of a swinging Iron Horse superimposed over a brightly colored stadium and playing field – realized $264,000.

But it wasn’t just vintage baseballers getting in on the action.

To the list of out-performers add a young King James: The 2003-04 SP Authentic LeBron James card signed by the then-rookie Cleveland Cavalier was among the few cards in the sale with a reserve (of $100,000). There were 500 such cards made; this one was numbered 336. Befitting the limited edition and condition – the card and the autograph rate top 10s from Beckett Grading Services – it realized $204,000.

And even younger basketball star fared even better in the event’s first session: The 2013-14 Panini Prizm Giannis Antetokounmpo, the one-of-one black card signed by the back-to-back NBA MVP, brought $384,000.

A soccer legend, too, got a kick out of being in such highly coveted company.

In 1958, a Swedish company called Alifabolaget made a card for a 17-year-old member of the Brazilian national team named Pele, who just happened that year to lead his team to World Cup victory over host nation Sweden. Before that win Pele was a relative unknown; soon after, the now-80-year-old became a beloved global superstar.

The Alifabolaget offered in the Fall Sports Collectibles Catalog has long served as an iconic introduction to Pele, but it seldom comes to auction in such spectacular condition; it has been more than two years since Heritage has seen one graded as high as PSA NM-MT+ 8.5. Little wonder, then, that it also outpaced its expectations: The card sold for $132,000, nearly three times its $50,000 estimate.

And on it went as Thursday night turned into Friday morning, and bidders kept aiming high.

The 1973 Topps No. 615 features among its fresh-faced trio of rookie third basemen the Philadelphia Phillies’ rising star Mike Schmidt and Los Angeles Dodgers future great Ron Cey. It was a card every young collector hoped to find while cracking wax in the 1970s; it’s no less sought-after today. A PSA Gem Mint estimated at $40,000 sold in the first session for 174,000.

“These results are indicative of the extremely strong market combined with the amazing marketing we were able to create around the auction,” Ivy says. “And that has brought hundreds of new and eager bidders into the marketplace.”

Those new bidders will get further swings at the plate Friday-Sunday as the Fall Sports Collectibles event continues here.