Amid the hundreds of new and vintage sports cards, autographs and memorabilia in Wheatland Auction Services online catalog is something even experts in the field consider a white whale something known to exist but virtually unseen in many years. Standing out among a recently consigned collection of vintage unopened boxes was a 1971-72 Topps basketball double box , featuring two separate 12-pack boxes with the original outer sleeve that held them. The unique configuration is believed to have only been used by Topps that one season.

Baseball Card Exchange authenticated the box, which currently has a $16,000 high bid.

When we sent it to BBCE, Steve Hart told us they only know of this double box because he had once seen the outer sleeve without the wax boxes in it, but they have never seen one intact until now, said Wheatland’s Stacey Whisman.

The auction includes thousands of sets, lots and singles from all sports including multiple high-grade rookie cards. Highlights include 1920 W516-1 Babe Ruth, Ty Cobb and Walter Johnson and larger lots of the same issue as well as T206 and other tobacco cards, complete baseball sets from 1964, 1965, 1968 and 1975, a complete 1958 Topps football set, a pair of 1972 Topps basketball sets and a 1964 Topps Beatles Black & White third series set. 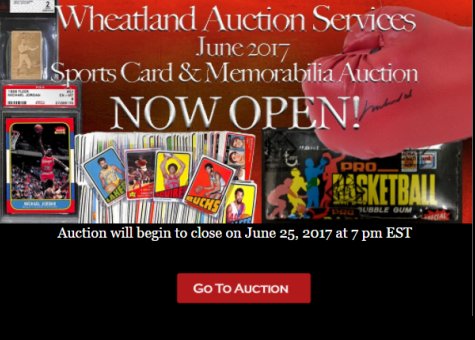 Autographs and memorabilia in the catalog include pieces signed by Mickey Mantle, Ted Williams, Joe DiMaggio and Muhammad Ali, a unique assortment of entertainment and NASA signed photos and a variety of non-sport collectibles.

Bid, register and view the items atwww.wheatlandauctionservices.com.   Bidding is in progress and concludes on June 25, 2017.