Steve Kerr’s Historic Shot – It’s Game 6 of the 1997 NBA Finals …. With the clock ticking under 10 seconds and the game tied at 86, Jordan drove the left side of the court and found himself double-teamed by Byron Russell and John Stockton. After a pump fake and step-through, Jordan passed to a wide-open Steve Kerr, who hit a 17-footer to give the Chicago Bulls their fifth championship of the Jordan era. The shorts he wore to take that shot, autographed and champagne-stained, are available right now in the Lelands Spring Classic!

Steve Kerr’s Shorts from Historic 1997 NBA Finals Game 6 Winning Shot (Photo-Matched)
For your consideration are THE shorts that Steve Kerr was wearing as he hit the historic game-winning shot in Game 6 to win the 1997 NBA Finals. Recently seen in the famed Michael Jordan; “Last Dance” documentary, there is a segment of the documentary devoted to Steve Kerr (in these uniform shorts) and his most recognized shot. Covered in champagne stains from the locker room victory celebration, these historic shorts have also been signed by Steve Kerr in black prominently in the front. Aside from the documentary, this impressive keepsake is photo-matched to Getty images 2628758 and 110328764. 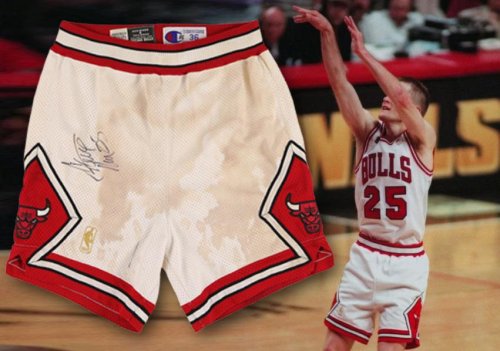