It was the centerpiece of one of the most memorable plays in Super Bowl history.  Numerous factors led to the Chicago Bears’ dominant win over the New England Patriots Jan. 26, 1986. The Bears boasted arguably the greatest defense in history and an offense built around running back Walter Payton, considered by many to be the greatest ever to play the position.

But the lasting image of that game for most fans was the touchdown scored by rookie defensive tackle William “The Refrigerator” Perry, and the jersey he wore in the Bears’ only Super Bowl victory is among the most intriguing lots in Heritage Auctions’ Summer Platinum Night Sports Collectibles Catalog Auction Aug. 29-30. 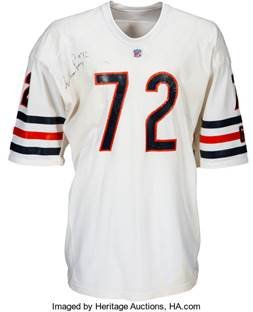 The demand for the jersey, which is signed in the upper right chest by Perry, represents far more than his six points in a lopsided Chicago victory, scored when the Bears already enjoyed a 34-point lead. The first-round draft pick was more than a sturdy wall in the middle of an already-stout defense. His off-field charisma was as large as his physical size, his smile with a missing tooth and booming laugh endearing him to fans of all ages.

Perry’s touchdown also represented a change in coaching philosophy. Despite his ample girth, he was an extraordinary athlete. He initially appeared on offense as a road-grading blocker who led the way for Payton out of the backfield. But getting the ball and plowing into the end zone (he also scored once during the regular season) made coaches acknowledge that some players on the north side of 300 pounds are athletic enough to be offensive weapons, in addition to their roles at the line of scrimmage. Because of Perry’s success, it is no longer outrageous to see a massive lineman lined up in the backfield, either as a lead blocker or even as a threat to carry the ball.

“This is one of the most significant jerseys in Super Bowl history, maybe the most famous for any player other than quarterbacks,” Heritage Auctions Consignment Director Chris Nerat said. “The Fridge already was a larger-than-life star, enormous and enormously popular among fans of the Bears and fans of football in general. Before he scored in the Super Bowl while wearing this jersey, it was unheard of that a lineman would be given the ball.”

The jersey has more history than simply its most famous day. The jersey was worn at least in 1987 and 1990, and was prepared, and perhaps used, in the 1991 season, a fact verified by the NFL logo patch at the front of the collar, which first appeared in 1991. The patch and the addition of Perry’s autograph, as well as dozens of team repairs, remain the only alterations since the Bears’ youngest star plowed into the end zone, sending shockwaves through the sport … and, no doubt, tremors through the end zone in the Louisiana Superdome in New Orleans.

The jersey is offered along with a letter from Resolution Photomatch, confirming its authenticity.