Heritage Auctions recorded 14 six-figure sales in its recent Platinum Night Sports auction, but it is the seven-figure result that has both the sports and the art world buzzing after a protracted online bidding war extended into the early morning hours Sunday.

“I need to credit my colleagues in the Art division for the assist on this one,” explained Chris Ivy, director of Sports Auctions at Heritage. “This isn’t the first time that we’ve been able to draw from other segments of our million-strong bidding clientele to benefit a Sports consignor.”

That beneficiary was a direct descendant of famed Major League umpire John “Beans” Reardon, the primary subject of Norman Rockwell’s charming painting that ultimately would appear in its final version upon a 1949 cover of The Saturday Evening Post. Reardon’s family had believed the original study they owned was merely a signed print, worth only several hundred dollars. 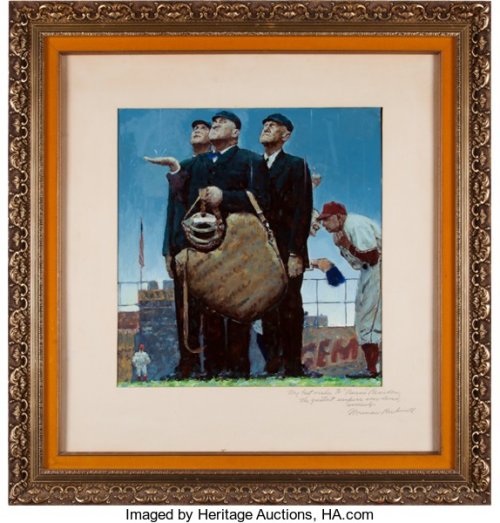 The noble Iron Horse accounting for the second and third top prices in the two-day auction event.  Gehrig’s 1937 New York Yankees home pinstriped jersey soared to a world record price of $870,000, while his 1924 rookie contract with the team drew a winning bid of $480,000.

Other legendary Yankees rounded out the auction’s top five, with Mickey Mantle’s 1954 jersey finding a new owner at $432,000, and a bat used during Babe Ruth’s first pinstriped season realizing $408,000.