“Success breeds success and we continue to add significant players to our bidding clientele with each auction,” explained Chris Ivy, Director of Sports Auctions at Heritage.  “You need a pretty deep bench to sell so many six-figure items in a single auction, and nobody works harder than we do to match elite collectibles with elite collectors.” 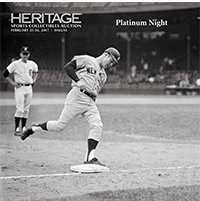 The red-hot trading card market grew even warmer in this event including:

A pair of relics from history’s greatest daredevil Evel Knievel confirmed the 1970’s icon is still fondly remembered nearly a decade after his passing, commanding $108,000 and $78,000 for his patriotic motorcycle leathers and diamond-studded walking stick, respectively.

Global gymnastics icon Olga Korbut offered five Olympic medals, three gold and two silver, as well as a number of other Olympic mementos to the general 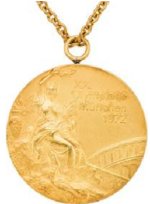 public as part of the world-record setting $12 million Heritage Auctions’ Platinum Night Sports Auction this past weekend. The Olympic superstar said she was thrilled with the results of the auction, in which her 32 lots sold for a total of $333,504.

“I am very pleased with the results of the Heritage Auctions Platinum Night Sports Auction. From the very beginning, offering my Olympic medals and memorabilia was never about money – it was about sharing my Olympic experiences,” Korbut said from her home in Arizona. “I have a great life in Arizona and I could not be happier. I am not in any financial crisis as has been reported by some international media outlets. Millions of people have touched these medals and I wanted to ensure that millions more could enjoy seeing them.”

Consignments for future Signature Sports Auctions are currently being accepted. Prospective consignors or sellers of quality vintage sports cards and sports memorabilia are encouraged to contact: Chris Ivy at 800-872-6467 Ext. 1319 or email: Civy@HA.com