Throughout the 20th century, the Ecuadorian-American soccer fan, numismatist, and museum curator Rony J. Almeida created a vast collection of soccer memorabilia to preserve the history of “The Beautiful Game” in South America. His collection of rare futbol collectibles known as the “Rony Almeida Collection” will be open for bidding through August 10 in the Goldin Auctions 2019 Summer Live and Premium Auction at GoldinAuctions.com.

The complete collection can be viewed HERE.

Every item in this collection has a championship pedigree, from the gold medal given to Uruguay’s goalkeeper Andres “El Buzo” Mazali for winning the soccer tournament at the 1924 Paris Summer Olympics, to the awe-inspiring World Cup trophy presented to the renowned Argentine-Italian forward of Juventus, Raimundo Orsi.

“We have auctioned off countless memorabilia collections over the years” said Ken Goldin Founder of Goldin Auctions. “But the time and effort Rony put into this collection is truly remarkable and its an honor to be making this one-of-a kind soccer collection available to the public.” 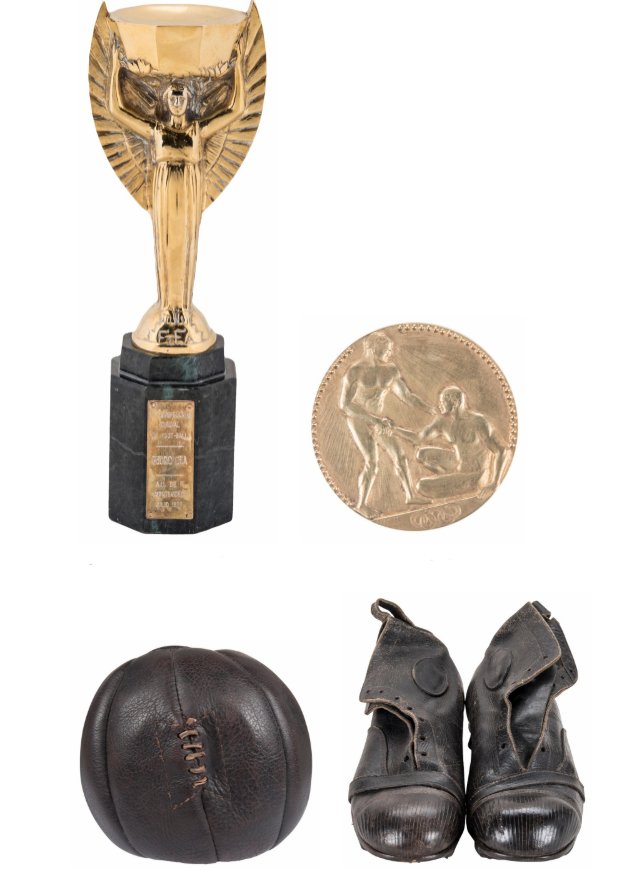 About Goldin Auctions
Sports memorabilia impresario Ken Goldin has sold more than $700 million in memorabilia from many of the biggest names in sports, history and pop culture and was the pioneer of using the medium of television to sell sports memorabilia. Over the past few years, Goldin Auctions sold a Honus Wagner T206 card for a public sale record $3.12 million, Babe Ruth’s 1918 contract for a record $1.02 million, the Mike Piazza Post-9/11 home run jersey for $365,000, and the 1979-80 Wayne Gretzky PSA GEM MT 10 rookie card for a record $465,000. Goldin Auctions strives to break new ground and offer collectors the best in collectible treasures up for auction in the marketplace. Goldin Auctions is the official auction partner of the Naismith Memorial Basketball Hall of Fame, the Jackie Robinson Foundation and the Babe Ruth Birthplace and Museum. For more information, visit www.goldinauctions.com