The world’s earliest-known stone inscription of the 10 Commandments – one of the most important documents in history, and a “national treasure” of Israel  – sold for $850,000 Wednesday, Nov. 16 at a public auction of ancient Biblical archaeology artifacts by Heritage Auctions in Beverly Hills, California. The two-foot-square slab of white marble, which weighs almost 115 pounds, is chiseled with 20 lines of letters in Samaritan script, derived jointly from Hebrew and Aramaic.

The tablet likely adorned the entrance of a synagogue destroyed by the Romans between A.D. 400 and 600, or by the Crusaders in the 11th century, Heritage Auctions Director of Ancient Coins & Antiquities David Michaels said. The auction opened with a $300,000 bid, but a war between two phone bidders pushed the auction price to $850,000.

The winning bidder does not wish to be immediately identified at this time. 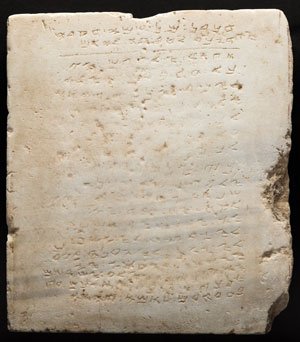 Although considered a “National Treasure” of Israel, the Israeli Antiquities Authority (IAA) approved export of the piece the United States in 2005 on the condition that it be displayed in a public museum, a condition that still remains, Michaels said.

“The sale of this tablet does not mean it will be hidden away from the public,” Michaels said. “The new owner is under obligation to display the tablet for the benefit of the public.”

After an introductory dedication and invocation, the tablet lists nine of the 10 commonly known Biblical Commandments from the Book of Exodus, omitting “Thou shalt not take the name of the Lord thy God in vain” (King James translation), and adding one commonly employed by the Samaritan sect exhorting worshippers to “raise up a temple” on Mount Gerizim, the holy mountain of the Samaritans, located near the West Bank city of Nablus.

Based on the letter forms chiseled into the tablet, scholars suspect the stone was probably carved in the late Roman or Byzantine era, circa A.D. 300-500, to adorn the entrance or worship space of a synagogue in or around the modern city of Yavneh, in what now is western Israel. It is unclear when the synagogue was destroyed but scholars suspect it could have occurred when the Samaritan sect was heavily suppressed by the Romans in the mid-400s, by the Byzantines in the 500s, or by the Muslims or Crusaders up to the 12th century.

The tablet was the centerpiece of an offering of Biblical historic artifacts, all thoroughly researched and authenticated, and owned by the Living Torah Museum in Brooklyn, New York. Additional highlights included a circa 70-200 Common Era nine-spouted Hanukkah lamp, which sold for $17,500.