An autographed 1997 Michael Jordan card realized more than $1.4 million at Heritage Auctions early Friday morning to become the most expensive Jordan card ever sold at auction.  The autographed 1997 Upper Deck Game Jersey Jordan, graded PSA NM 7 and Auto 8, headlined an extraordinary roster of rarities in the first Heritage Auctions sale devoted solely to the modern card. The event realized $7.5 million, with almost every one of the 437 cards offered exponentially exceeding pre-auction estimates thanks to the almost 1,000 bidders around the globe who competed well into the early morning hours.

“It would be understatement to say we’re ecstatic with the results from our first Modern Sports Card Catalog event,” says Chris Ivy, Heritage’s Director of Sports Auctions. “Heritage has long been the leading seller of vintage cards and memorabilia. But with these cards and these results, it would appear we just reset the modern collecting hobby as well.”

Until Friday morning, the most expensive Jordan ever sold at auction was the green-shaded 1997 Michael Jordan Metal Universe Precious Metal Gems offered by Heritage in December. That rarity realized $915,000 just two months ago. 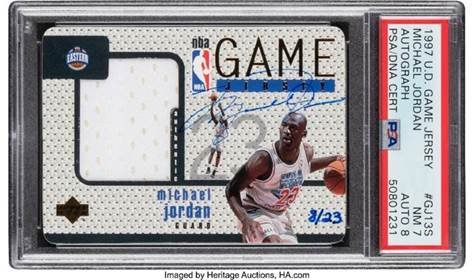 That the 1997 Upper Deck would be the first Jordan card to shatter the million-dollar mark is no surprise. After all, it’s one of only 23 in existence and the first autographed Jordan card to feature a piece of game-worn jersey – in this case, from the 1992 NBA All-Star Game.

The auction’s second-place finisher was Jordan’s iconic rookie card, the 1986 Fleer graded PSA Gem Mint 10, which realized $645,000. Only last May, Heritage sold a perfect-condition Jordan rookie for $96,000; the ’86 Fleer would then go on to shatter that ceiling time and again, resetting the record books with each fall of the hammer.

That Fleer is now so coveted that a PSA Mint 9 realized $79,200 in Heritage’s Modern Sports Card Auction, more than twice what a Gem Mint sold for a year ago. And a PSA NM-MT+ 8.5 brought $44,400 by auction’s end. And even the chance at a Jordan rookie, or two or three, remains a hot commodity: A sealed 1986 Fleer Basketball Wax Box with 36 unopened packs more than doubled its estimate when it sold for $228,000.

But Thursday night into Friday morning, the sought-after Jordan rookie was but one of myriad big players in a sale full of outstanding performers.

In fact, another Jordan card – the red-tinged 1997 Metal Universe Michael Jordan Precious Metal Gems, graded BGS NM-MT 8 – realized $480,00, a price befitting one of only 100 such cards ever made. LeBron James, not to be outdone, also realized $480,000 for the 2003 Topps Chrome Black Refractor graded Gem Mint 10. There were but 500 of those King James rookies made; this one more than doubled its pre-auction estimate.

Indeed, this was the story of the night and the early morning hours. Pre-auction estimates had become distant memories by the time the last bid was placed long after 2 a.m. Central time Friday. That applied in equal measure to legends and rising stars in all sports – and some cards made for an entirely different kind of game.

One of the night’s biggest scores had nothing at all to do with sports.

Heritage has long been the home for record-setting Pokémon collectibles, and that appellation endures in this event. An uncut proof sheet of 1999 Wizards of the Coast Pokémon Unlimited Base Set cards realized $117,000, which was almost three times estimate – and averages out to slightly more than $1,060 per card featured on the sheet. That’s one way to catch ’em all.

More extraordinary modern cards, along with some legendary vintage offerings, are available in the Winter Platinum Night Sports Auction, which is open now and goes into extended bidding Feb. 27-28. And to meet the increased demand, beginning March 4 Heritage Auctions launches its Monthly Showcase Sports Auctions, for which the Dallas-based auction house is taking consignments of both vintage and modern graded cards until Feb. 25.