A bidder who wished to remain anonymous made the fourth and final bid on the ring that was said by Yogi’s son Dale to be the “only one of 10 title rings that Berra wore after winning five straight World Series.” 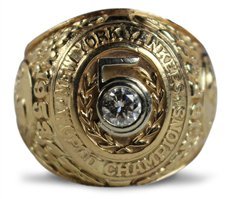 $159,720: Berra’s 1953 World Series Championship ring, which was the only one of his 10 title rings that the legend actually wore after winning five straight Fall Classics from 1949 through 1953:

Visit http://auction.steinersports.com/ for the full results.