A month after his first NBA jersey sold for over $80,000, the second game-worn rookie year Zion Williamson jersey has netted a big price, too.   The City Edition shirt worn by the New Orleans Pelicans rookie star netted $42,010 late last week on the NBA Auctions website.  In all, 75 bids were made in the auction, which opened February 27.

Williamson wore the Size 52 jersey (with six extra inches of length) in a February 6 in a win over the Bulls in Chicago.  The jersey is registered into the NBA and MeiGray Game-Worn Jersey Authentication program. “Vs. Bulls 2.6.2020” is handwritten on the tag at the bottom of the jersey. 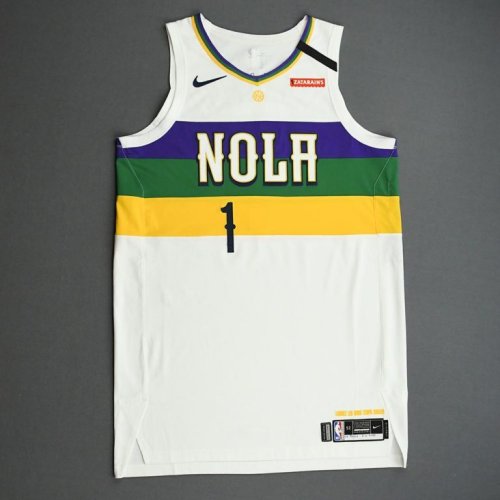 Williamson played 25 minutes and registered a team-high 21 points in the game at the United Center.  In his first 19 NBA games, Williamson is averaging 23.6 points and 6.8 rebounds per game while shooting nearly 59 percent from the field in a late bid for Rookie of the Year.   Read full story at Sports Collectors Daily.